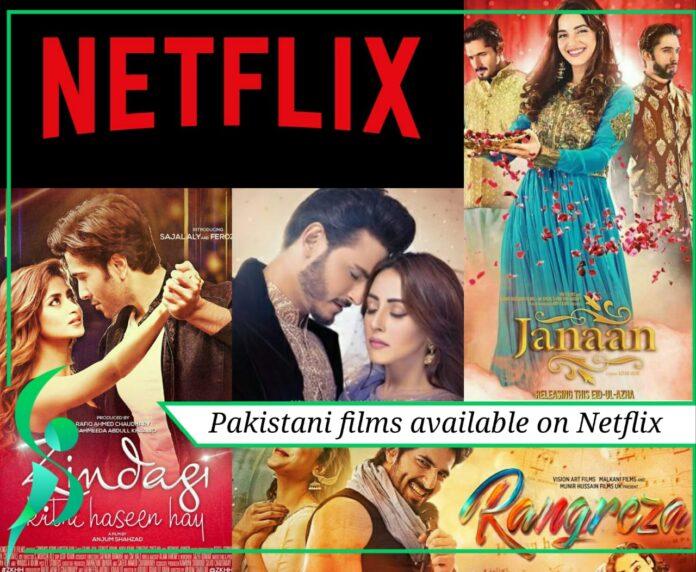 Over the years, Pakistani films have struggled to acquire recognition from all over the world. But seems like the rainy days are over since our movies are now streamed in international festivals, furthermore, they are now easily accessed on the popular digital streaming site Netflix for all the users in the world.

In the present world, Netflix caters to all kinds of relevant digital content, and produces it too by the name of “Netflix originals”. Since several individuals accessed it for relaxing and quality time, the audience of our country can also stream their content, as many Pakistani films are available on the popular subscription-based service.

A list of Pakistani films available on Netflix are as follows:

The film released in the year 2018, stares Ali Zafar and Maya Ali in the lead roles alongside veteran actor Javed Sheikh, Mehmood Sahab, Faisal Qureshi, and others. A gangster hires a goon Teefa to kidnap his friend’s daughter for an arranged marriage, but things took an interesting turn when the goon develops emotions for the girl.

The comedy/action movie was applauded widely and managed to do a successful business. The film was directed by Ahsan Rahim and rated as 7.3-star on IMDb.

One of the Pakistani films depicts the struggle of a girl, who traveled to Dubai to serve as a maid in a financially stable family. As the story progress, her bond with the elite employer family is also shown. The film is a good watch, stares Hajra Yamin, Kiran Malik, and Adnan Jaffar in lead roles.

The film cake starred Amna Sheikh, Sanam Saeed, and Adnan Malik in lead roles, released in the year 2018. The film narrates a story of two sisters, united under one roof as the illness of their father progresses. A tension arises in the household when old wounds and tales surfaces.

The story is relatable to the audience, it is all about love, loss and passage of time.

ZKKH was one of the Pakistani films, which narrates the story of a young couple who faces trouble in their marriage because of ego, financial situation, career goals, etc. The film released in the year 2016, starred ex-couple Sajal Aly and Feroze Khan, who give powerful performances.

The film was rumored to be the remake of the Indian film Akele hum Akele tum. The film ZKHH takes you on an emotional rollercoaster ride, where the two protagonist tackles different themes of life.

The film illustrates a real-life story, where a trucker is jailed after driving five unfortunate individuals across Quetta, and officers take on this incident.

The film was directed by Hashim Nadeem, where Imran Abbas, Sadia Khan, Hamid Khan, Sajid Hassan played significant roles. It was released in the year 2015, rated 6.8-star on IMDb.

Rangreza witness the story of a love triangle between a rock-star singer, and the son of a politician, both of them fall for the same girl belonging to a qawwal family. The film was lead by a super stellar cast Bilal Ashraf, Urwa Hocane, and Gohar Rasheed.

Dukhtar, a Pakistan films released in the year 2014, depicts a story of a young mother who embarks on the journey of freedom, for which she had to keep her daughter in a hostage, saving her from the horrendous act of tribal marriage.

Unfortunately, Dukhtar represents the story of girls residing in rural areas of Pakistan and India, specifically. It received positive reviews from all over the planet. The film starred Samiya Mumtaz, Mohib Mirza, and Aleha Arif in lead roles.

Yet, one of the Pakistani films featuring Saniya Mumtaz alongside Shaz Khan, Hameed Sheikh, and others. The film features the story of a railway station master, coping with the loss of his wife, the alienation of his son, and fighting the odds of the world.

Yet, another feature of Bilal Abbas, alongside Ali Rehman and Armeena Khan. It is one of the Pakistan films, where beautiful scenery of Swat valley is shown, illustrating a love story between Meena and her adopted cousin.

All of the mentioned Pakistani films are available on Netflix, which one do you like? Let us know.