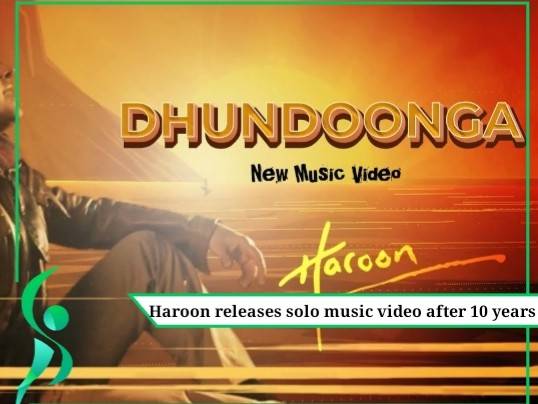 Vocalist and author Haroon, who was once in the past one of the lead artists in popular music band Awaz, has released a single — Dhundoonga — following a 10-year long break.

Haroon Rashid is an honor winning British brought into the world Pakistani artist, vocalist, music maker, writer, executive, and social extremist conceived in London, UK to a New Zealand mother and Pakistani dad. He has sold a large number of singles and collections worldwide and has performed everywhere settings, for example, the Wembley Arena.

The performer, who is likewise the maker of eminent energized show Burka Avenger, took to Twitter and reported the news:

“Excessively eager to share my first independent music video in quite a while, Dhundoonga. The Facebook transfer got 300k perspectives in a couple of hours; presently sharing the YouTube connection. Appreciate. Do peruse the intriguing history behind the tune on the YouTube notes,” he composed.

Dhundoonga will bring all the 90s children down the world of fond memories; the melody is a happy and enthusiastic creation that has a ton of fun components to it. The music will quickly make you tap your feet. The enlivened video highlights Haroon as a person who is scanning for his perfect partner truly all over the place and each time his excursion stops because of an impediment. He is train surfing in a desert, driving a convertible in a city, skate-loading up in the midst of lavish trees, riding a snowmobile, flying a propeller plane, ascending mountains, waterway boating, at long last arriving on an island where he finds ‘the one’.

As per the depiction on its YouTube, he made this great music video a couple of years back yet never got an opportunity to discharge it. Be that as it may, presently as everybody is stuck at home and needs a diversion, he chose to put it out there at any rate.

“The music video is one of its sort for Pakistan. It was shot with me live on a green screen and all nature and props were meticulously synchronized utilizing PC designs and activity. The thought was to give it a retro movement feel. I formed the tune for this melody numerous years back and Sabir Zafar composed the verses,” Haroon said.

“The first chronicle was done at Kashan Admani’s Dreamstation studios in Karachi years back and had a pop-rock feel. At that point, I adjusted it in my own studio at Unicorn Black with Jonathan Jones to give it an all the more pop vibe. The video was coordinated and enlivened by capable Uzair Zaheer Khan. The craftsmanship and condition workmanship was finished by the splendid craftsman Yousuf Ejaz Ahmed. The shoot was done at Keychain studios. Much thanks to you such a great amount to everybody included,” he included.

You can watch the tune here: