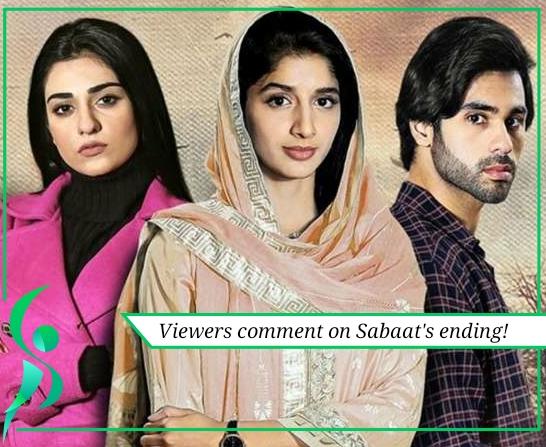 The viewers commenting on the climax of Sabaat are mostly positive. The very well loved drama Sabaat just aired its last episode a few days ago and people had a lot to say about it, not in bad but in good words. People loved two characters the most and those were Mawra Hocane‘s part of “Anaya” and Usman Mukhtar‘s “Dr. Haris”. Keep reading to read more viewers comments on the ending of Sabaat!

To give you guys a little recap on the last episode, Anaya forgives her husband Hassan (played by Ameer Gillani)in the end after Miraal ( played by Sarah Khan) accepts her mistakes in front of her brother showing that sometimes forgiveness is worth everything!

Miraal faces a critical accident in the end that makes her rethink her bad deeds in life and asks Hassan ,her brother, and Dr. Haris for forgiveness, which he does instantly as he still has a lot of love for his wife!

Now coming to the viewer comments on the drama, everyone appreciated how Sabaat ended on a very positive note! Here are a few comments from the viewers.

The praise for Anaya’s character!

The good words for the message of Sabaat!

And some comments for the characters as well!

This is all for the viewers comments on the ending of Sabaat! What did you guys think of it? Did you like it? Did you love it? Let us know in the comments!