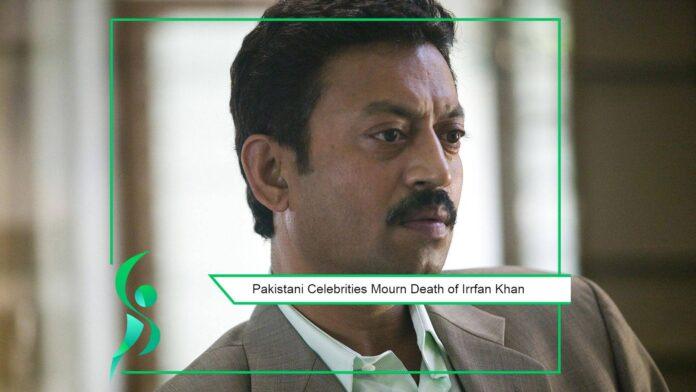 Legendary Indian star Irrfan Khan passed away on Wednesday after a long battle with cancer, leaving Pakistani celebrities saddened over his death.

Pakistani film and TV stars mourned the demise of Khan and paid homage to the late star.

Actor Sajal Ali said she was shocked to hear the news. “Shocked and sad! What a brilliant actor he was. Rest In Peace,” the Yaqeen Ka Safar actor posted on Instagram.

Film actor Irrfan Khan’s sudden passing at the age of 53 left fans and peers of the veteran shocked. Not only have his Bollywood compadres have lamented over the loss, members of the entertainment fraternity in Pakistan have also taken to social media to pay their respects to the late

Lollywood veteran Shaan Shahid praised Khan’s work while also saying a prayer for the fallen actor’s family. “A sad news indeed, my prayers for his final journey. May his soul rest in peace. May Allah grant him Jannah and give his family saber(patience). A fine actor Who’s work will be remembered by the generations to come,” he said.

Actor Imran Abbass went on to deem Irrfan Khan’s passing a loss for the entire arts community. “Rest in peace the legend Irfan Khan!! You will surely be missed forever. Since art has no boundaries, we can feel the pain and are equally grieved by your sudden demise. May Allah bless the departed soul. Undoubtedly, we all belong to Allah all mighty and have to return to Him,” he said.

Likewise, Zara Noor Abbas paid her tribute in pretty much the same manner. She wrote a line from the track Jaane De from Khan’s film Qarib Qarib in the caption. “Wo Jo tha Khawaab sa, Kya kahain jaane de,” the caption read.

Many other celebrities stand united to mourn the loss of a great actor.They are remembering him as the one who always was witnessed thinking outside the box. One who valued creativity and loyalty to his craft more than his fame.

Khan in his final tweets advocated strong measures to be taken against coronavirus. His humanitarian soul lived strong while his body slowly deteriorated.

He was diagnosed with a rare form of cancer in 2018. Khan was admitted to the intensive care unit (ICU) of a Mumbai hospital with a colon infection since then his deafening silence haunted social

Because he was battling a prolonged disease, his on-screen presence was missed. Despite his condition, he managed to give one last hit, that being ‘English Medium’.