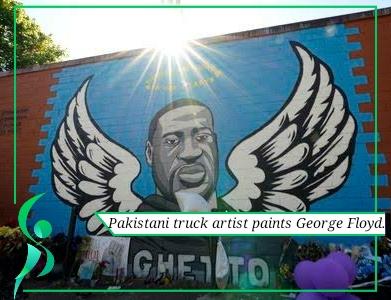 Who was George Floyd ?

George Floyd was a 46-year-old, known as a giant man by his family and friends. The black man was a resident of Minneapolis. He died after a police officer kneeled on his neck for 8 minutes and 46 seconds as he told them ” I can’t breathe”.

Movement sparked after his killing:

A movement named All Black Lives Matter was started all over the U.S and Europe as soon as the video surfaced on the Internet. People all over the world painted murals and street to extend their support towards the cause.

Pakistani artist supports the cause:

A Pakistani truck artist Haider Ali painted a mural in the support of George Floyd on the wall of his house, Karachi Pakistan. He stated that his artwork not only pays tribute to George Floyd but it pays homage to everyone fighting with inequality and injustice.

The above slogans mean that the world belongs to none of us, it is for only those who have big hearts and helping hands.

The other words written on it are Adal and Insaf and Barabri which means Justice, Fairness, and Equality. According to Haider, the black on the mural depicts the importance of black color.

Haider mural not only stands with George Floyd but it also extends solidarity with Muslims of Kashmir, Myanmar, Palestine, etc. The Muslims living there are killed with cruelty based on their caste and religion.

Pakistani truck art is popular all over the world which elaborates floral pattern and calligraphy.