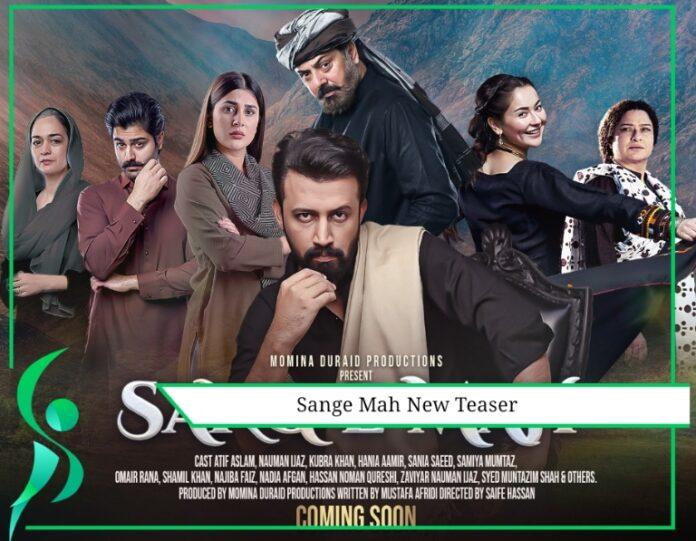 The new teaser of MD Productions and HUM TV’s much-anticipated Sange Mah raises curtains on the play’s storyline which unfolds in a village setting where some prolonged rivalries are being settled in a jirga. A perfect blend of thrill, action and comedy, the new teaser features the exceptionally brilliant Nauman Ejaz, Atif Aslam, Sania Saeed, Omair Rana and a glimpse of gorgeous and uber talented Kubra Khan and Hania Aamir.

Though the initial teasers give away little about the serial’s plot, but less seems more with the enigmatic roles of Nauman Ejaz, Atif Aslam, Sania Saeed and other cast members in the brilliantly cut teasers. The suspenseful setting and varying scenes exhibited some confrontations and a simultaneous but lukewarm effort to settle them in a tribal court.

Sange Mah is the second of the Mustafa Afridi’s trilogy, preceded by Sang-e-Mar Mar and features an ensemble cast including Naumaan Ijaz, Sania Saeed, Samiya Mumtaz, Zaviyaar Noumaan Ijaz, Omair Rana, Kubra Khan, Hania Aamir and many others. Also, in a first, the nonpareil of the subcontinent music industry, Atif Aslam debuts in this highly anticipated drama and gives out a solid TV presence, leaving audiences across this region marveling at his sight as an actor. Directed by Saife Hassan and produced by Momina Duraid under her banner production MD Productions, the serial is set to go on-air very soon on HUM TV.