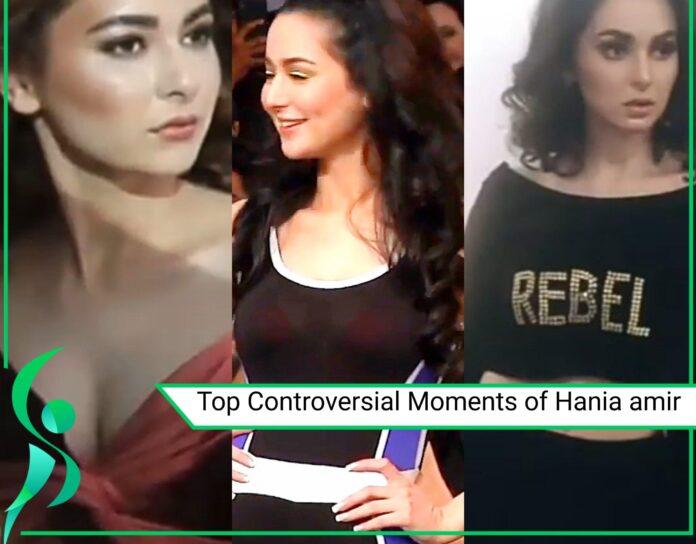 The showbiz industry is full of drama, and we mean this literally! Everyday a new actor/actress is targetted for their actions such as celebrating halloween or wearing revealing clothes etc. Today we bring you the top controversial moments of Hania Aamir that triggered the general public.

Keyboard nazis and online jihadis were extremely angry when this photo of Hania was shown on social media as it showed a little bit more cleavage than the Pakistani people are used to and as usual Hania was bashed for her clothing choices.

This ramp walk that Hania did a while ago in a sheer black tracksuit also became the talk of the town and a prominent part of the meme world as it was extremely skin tight and see through. What set the people of the most is that the actress’s underwear that can be seen clearly through her clothes.

Hania’s wardrobe choices for Na Maloom Afraad were a little too skimpy for the people as she can be seen showing off too much skin. Rather than appreciating her acting in the movie, her clothes were targetted for not meeting the standards of our “Islamic Awam” and yet again she was bashed for her clothing choices.

Another one from Na Maloom Afraad is this unusual lehenga choice that Hania had on. We could clearly see her backless and it definitely was one of the most triggering and talked about controversial moments of Hania!

Last but not the least is this t-shirt/lehenga combination that Hania wore on a ramp walk and just a little bit of skin reveal went a long way as it hurt the people’s sentiments A LOT!

This is it for top controversial moments of Hania Aamir! Keep visiting our website for more lollywood updates!