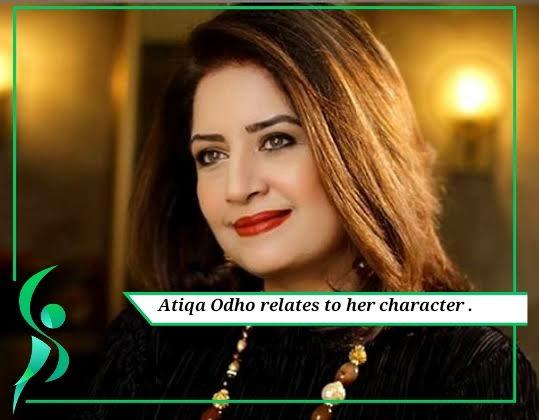 The veteran actress Atiqa Odho speaks regarding her character in PKS a popular drama serial aired on HUM TV channel.

Actress Atiqa Odho has always been quite selective about her roles, and recently she was seen portraying a character by the name of Mansoora, who married a man younger than her. Though mixed reviews were heard about her role, one cannot deny the fact that she has played blazingly, which people are definitely going to remember for ages.

In a recent interview with a leading blog, Atiqa Odho speaks regarding her character in PKS. She was asked about her expectation from the character, to which she replied, “I’m spoilt because, in my career of about 30 years, I have had very few projects that have not been successful. I am so blessed and privileged to always have hit that sometimes I take them for granted. I’m thrilled that Mansoora has become somebody whose story people followed and invested in. It is a great feeling to be acknowledged and supported”.

The 52-year-old actress also chatted about the risk attached to the drama, and told,” Sometimes I chose scripts because I have to run the kitchen, so I choose the lesser evil from a lot of bad scripts, while other times I sign when I enjoy the outlook of a character. The reason I signed PKS was that I liked Mansoora. I love the fact that she was married to a younger man; such roles and scripts are not written for television in Pakistan. I always look for a character graph in my roles from where they start and where they end.”

Atiqa Odho also told her fans about how she relates Mansoora from her present life. According to the actress, she faced dishonesty and being lied, but never admitted the case, and always thought about the outcomes of a damaged home. It took a while to acknowledge the truth, and then there was no going back.

“Mansoora was very close to my personal life because I’ve been through something like this in a marriage, though not with a younger man. I’ve been lied to and cheated on and despite knowing it for years, I denied, ignored, and thought about consequences in terms of a broken home and children. I have lived Mansoora in my real life; it took me a long time to get out of a failed marriage. This is what happened to Mansoora as well that she was struggling to accept the idea of a failed marriage,” Odho said.

The actress also opened up about her bond with Bilal Abbas, his on-screen son in PKS. She also remembered her Humsafar days with Fawad Khan, with whom she is working again in a project titled Nilofer. The interview where Atiqa Odho speaks regarding her character in PKS is shared below: