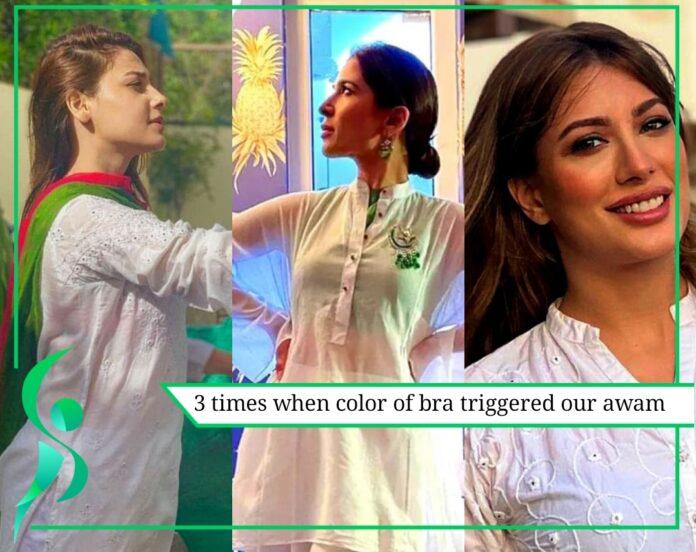 Pakistani film and television actress who is well known for her roles in films such as the “Load Wedding”, “Jawani Phir Nahi Ani” and “ Chalawa”. She is the recipient of the Lux Style Award for her role in the drama serial “Meray Qatil Meray Dildar” and was honored by the Government of Pakistan with the Tamgha-e-Imtiaz in 2019.

The” Punjab nahi jaungi” star, Mehwish Hayat posted a message calling for Pakistanis to embody the ideals of our forebears, but instead of focusing on her message, people appeared more interested in the color of her bra.

“The Quaid said, “It is only with united effort and faith in our destiny that we shall be able to translate the Pakistan of our dreams into reality.” Hoisting the flag is not enough, if we really respect this country, we need to embody the ideals of our forefathers. Happy Independence Day,” she wrote on Instagram.

However, some netizens started to troll her for the color of her bra. Soon Mehwish noticed the criticism and took her Instagram platform to raise her voice against these perverts.

“Literally sickened seeing some of the comments under this post,” she wrote on her Instagram Story. “The perverts debating the color of my bra just shows how sick and petty their minds are. Black, grey or green, it’s none of your effing business! for gods sake grow up-No wonder the society is in the mess that it is!”

Shortly after her first story, she then posted a second story saying, “I would suggest that there are much bigger issues that need addressing. Only if this energy could be invested in better, more worthwhile pursuits!”. She urges her fans to focus on addressing some important issues rather than the color of her bra.

Ayesha Omar is a well-known Pakistani Actress who made her debut in the College film -Love Mein Ghum (2011). She is one of Pakistan’s highest-paid Actresses, who made herself famous by all-time famous Television comedy show “Bulbulay”. She also displayed her talent in singing by relasing her famous albums “Chalte Chlalte” and “Khamoshi”.She also received the Lux Style Award for this Album.

Her attire was a bit see-through and the fabric was making the green inner wears she was wearing underneath the dress more visible. As soon as her pictures were shared on different social media platforms it caused excessive criticism by Netizens.

After her post comment section flooded with trolls. Some people start calling her ‘Besharam’!, “What the hell are you wearing “and etc. It wasn’t the only time she was trolled. She, however, Did not respond to any of the trolls.

Hina Altaf is a well-known Pakistan Actress, Model, and a Youtuber. She has made millions of followers over all these years with her beauty and innocence. Hina showed herself with her outstanding performances as a leading role in her Debut Drama serial “Mariyam Kese Jiyai”. It proved as a turning point in her career and she started getting many lead roles –including Dram Serial “Abro” in 2017. Her recent performance in Drama Serial “Dor” is earning her praise and appreciation from her fans. Moreover, She is also a Host, she appeared in many Reality Shows including “Madventures”. She hosted “Pepsi battle of the bands “(Season4) alongside Ali Safina. Hina Altaf also owns a Youtube channel alongside Ayesha Omar. Where she posts vlogs and different tutorials to entertain her fans.

Hina Altaf posted a picture of herself on Independence Day while wishing her fans and celebrating ’14 august’ alongside her family. She was wearing Traditional ‘Shalwar Kameez paired with a pink and green ‘dupatta’ while holding Pakistan’s Flag. Her outfit was a bit see-through that made her pink bra visible and it was showing her skin underneath too. Many Social media users loaded the comments section with their hateful comments.

Though the picture was appropriate for many users but some find it ‘vulgar’. Some commented “smjh to gaya ho hina” , pointing on her bra. Hina Altaf did not responded to any of the trolls and she deleted her post after the backlash.

In our opinion, On all the celebrity Independence Day posts Actresses were actually trying to show their love for Pakistan by wishing their fans and asking them to love and protect their country. But instead of focusing on their message, they were more interested in what they were wearing.

It’s now time we take our responsibility to use social media platforms to raise awareness about important subjects not discussing what celebrities are wearing. It’s their choice to wear what they want to not ours