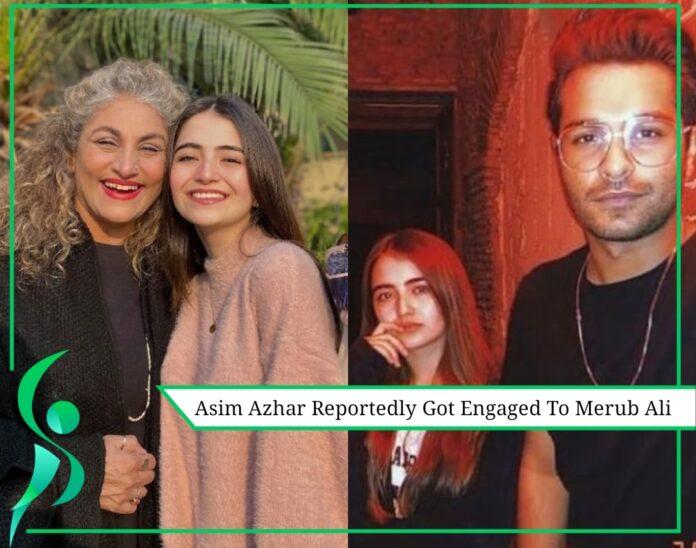 Asim Azhar is a young and one of the most talented Pakistani singer, musician, song writer, actor and host. He is 24 years old and was born in a Tribal family of –Hakla Gujjars- who migrated from Akhnoor to Jammu on 29 October 1996 in Karachi. His mother is also a famous Pakistani actress in a television industry from decades and ahe is also a politician her name is Gul-e-Rana and his father name is Azhar Hussain who is a pianist. He was enthusiastic about his singing since childhood and he started singing at the age of 16. He is known as ‘Justin Bieber’ of Pakistan.He is a big fan of Shahrukh Khan and Singer Sajjad Ali, Kishore Kumar and Mohammad Rafi. He started his work as a YouTuber and also he have huge fans following on Instagram.In February 2020 at in Dubai he got The Best Stylish Performer award.He has 2.2 million followers on Instagram and 803 thousands subscribers on YouTube.He ranked himself in a fourth Pakistani singers who crossed 100 million views after Atif Aslam, Rahat Fateh Ali Khan and Momina Mustehsan as a result of his song “Jo Tu Na Mila”.Afterthat in july 2020, his song “Tera Wo Piyar” hit 140 million views.

As mentioned above he started his career from You tube but later on he start working for Pakistan music industry and also done many concerts.

Main point: In coke studio season 9 he sang the song ‘Tera Woh Pyar’ with famous female singer of Pakistan Momina Mustehsan which got high rating in social media platforms.He also performed on this tune with Momin Mustehsan at Hum Awards event in 2019. 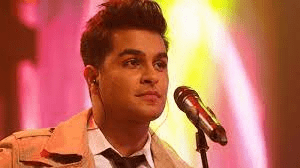 In 2013, he shared a video of his song “Shriek Punjabi Remix”, which got huge ratings and hit to extreme level and due to which he was able of earning huge fame and reputation in the music industry. In the very next year, he released his four tunes which are “Hands In The Air, Maahi Aaja, Soniye, and Sunlay. These tunes had gave him a passive opportunity in making his name in the rising to stars of Pakistan in the music. Finally, he work more and set up his name in the industry. Furthermore he sung various hit OST songs for different TV darams for different channels, some of these are Dil Banjara’ (Hum TV), ‘Haasil’ and ‘Tere Bina’ (Geo TV ) and ‘Saajna’ for TV sequential ‘Anabiya’ for the channel named ARY Digital. 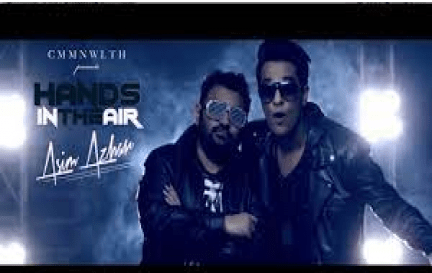 The other point is Asim Azhar is a huge fan of Sharukh khan and on his birthday Asim Azhar tweeted him in which he wished him and also expressed his wish by singing for him. The tweet became viral and got a huge fan moment for Asim Azhar when Shahrukh replied to him in a tweet. Here is the twitter exchange image between the Asim Azhar and Sharukh Khan. 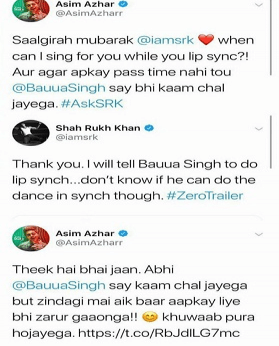 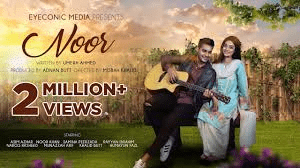 Mostly his fans made some assumptions and rumors on social media by taking his caption wrong and the society thinks that he is in relations but these statements holds no water. Mostly he got in attention with his relationship with Noor KHAN and Hania Amir.

The telefilm titled ‘Noor’ is which is released by Pakistani channel Urdu 1 ,this film is written by Umera Ahmed, a very famous personality for his epic novels and dramas. She needs no introduction every one know him by his struggle and achievements in drama and novel industry. Noor Khan who is a famous actress and sister of well known actress and Asim Azhar play lead roles in this film.Fans loved the chemistry they shared on screen and on this respect they consider them in relationship which was just rumor nothing else.

After this social media make the rumor of relationship between Hania Amir and Asim Azhar which were cleared by both of them at the end that there is no such thing. They worked together for Ahsan Talish’s telefilm, Pyaar Kahani. This was their first project that they did together as a couple. In a live session with Hania Amir with her best friend Aima Baig, revealed that she and Asim Azhar are not in any kind of relationship. She said : “We are friends, we are not together, we are not dating, we are not a couple. But we are best friends.”Furthermore in an interview which was between Waqar Zaqa and Asim Azhar , he said in the answer of question that is he single? He said, “Yes, I am single and I have been single for some time.” he says how people love to add spice to every piece of news they discover about celebrities.

But now in the recents we also seen a clash between the them after getting video of Hania Amir got viral and AsimAzhar respond to it in the form of gif and said “Alhamdulilah”.Here is the link of tweet.

The response by Hania Amir makes more spice in it and also it make seems situation critical.she wrotes in her Instagram account that :

“Where a woman showing affection to her loved ones is wrong but a man ejaculating on a woman’s picture on video on the internet is re-tweeted and made viral content. Just another day surviving, hope you all are doing well in this disgusting world and keeping your goodness intact. Someone else’s evil shouldn’t ruin your goodness”. “You can either be a celebrity, or a bitter ex with no dignity,”

and also adds while addressing with fans that

“show some responsibility” to their generation and their women.

Recently we seen that , the news of the engagement of Asim Azhar with fashion blogger and model Merub Ali went viral on social media platforms who is a very good friend of the brilliant singer. On Instagram, social media fans of Asim Azhar are gossiping about their engagement and shared pictures of them. They both have friendship and have been spotted together a lot since a long time.

Merub has shared her picture with the mother of Asim Azhar’s on her Instagram account. Due to this people thought that they thougth have got engaged in a private ceremony. 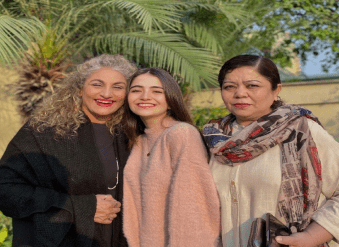 Media platforms is that different Fan pages of Asim Azhar viral the news on social media , without authentic source and confirmation by claiming that Asim Azhar and Merab Ali simply got engaged. When on social media the users have continue chatting about their engagement and sharing photos of them and spreading rumors about their engagement ceremony . So,After noticing that about four weeks ago a fan page of Asim Azhar shared this post on Instagram story in which we can see that finally Asim Azhar speak up in this matter and he is clarifying the news by saying that:

“Hi, Please don’t post such things which can affect my family and friends whatever you’re posting about me and merub is not true. She’s a really good family friend of mine I consider her just like my sister and I request you to please remove the posts portraying wrong messages about me and merub. Thank you to each and everyone of you for supporting me  throughout.” 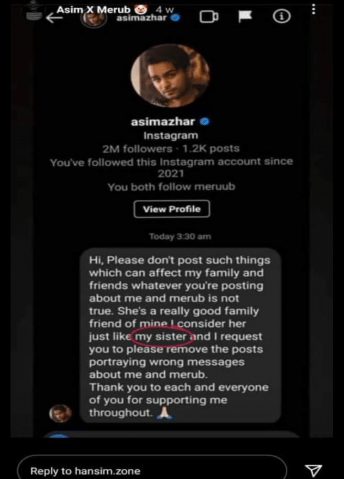 But Netizens say that they both have got engaged in a private ceremony.They shared pictures of them which read they both are got engaged.

The sources of this news are a lot of Instagram pages who have posted the news without valid source.

Nothing has been confirmed yet, but strangely, people are shipping them and want them to tie the knot.