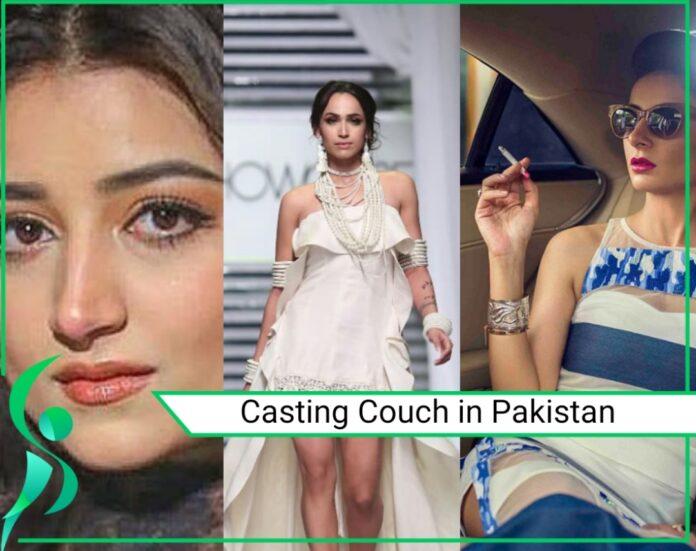 Time and again we find out anecdotes such as, ‘You need to do certain favors when you become a part of the film and entertainment industry.’ But many of us don’t comprehend that these anecdotes are not solely for films and drama serials – they also happen in reality with people like you and me.

It’s widely known that in Pakistan, bribery and connections assist you in landing influential roles and reaching places. Over and beyond these two unpleasant acts, there is one more way to climb the ladder of success quickly and that’s by offering sexual favors.

Honestly, it doesn’t matter when and where you were born but if you want to make it big in the acting industry, then you’re bound to come through directors and producers asking for sexual favors. It’s also due to the reason that surviving in the film industry isn’t a cakewalk. Often, female models have to pay heed to the director’s senseless whims to land a role in films. There have been numerous cases where directors have told the actresses to do inappropriate stuff to get a role. Some directors stooped down so low and have demanded sexual favors from the female models. And it’s not just the females who are asked for such cheap favors, males face such situations too.

Sadly, the casting couch is a part of most of the entertainment industry nowadays be it Hollywood, Bollywood, or Lollywood. It has strong roots embedded in all sectors as people prefer taking a shortcut than following the conventional path of success and the powerful biggies like to take undue advantage of others in barter to provide a role.

What’s the meaning of Casting Couch?

Casting couch is an age-old phenomenon that has been happening behind the doors and it’s not a new hypothesis, rather it is as old as our civilization. Recently people have started noticing it. Many actors and actresses have been a victim of sexual harassment in the entertainment industry.

The casting couch is a practice of demanding sexual favors from a job applicant in return for a job in the film and entertainment industry, particularly acting roles. Primarily casting couch refers to physical couches in the casting office. In the United States, the practice of casting couch is labeled illegal and punishable but there isn’t any strict law against it in Pakistan as of now.

Casting directors and film producers use the casting couch approach in a bid to extract sex favors from ambitious actors and actresses in Hollywood, Bollywood, Lollywood, and other fragments of the film industry.

Often the actors have stood up against casting couch and harassment. Formerly, the MeToo movement made headlines and exposed some famous names from various professional fields in the USA. But in the Pakistani film industry, victims of sexual harassment still shy away from opening up and if they do come forward they face criticism from people and struggle a lot because they decide to reveal biggies. However, with awareness and the onset of the #MeToo movement, few strong people spoke about it and are calling out names who demand sexual favors in exchange for work. Still, it can be concluded, it’s not that simple and easy to point out the big names of the Pakistani industry.

Now, let’s have a look at some of the people who have faced the casting couch in their attempt to get a role in this industry.

An ambitious model and actress Nida Malik accused a PTV PR person of casting couch, he made demands for inappropriate favors in exchange for a role in a forthcoming drama. The actress wrote an open letter on her Facebook account and attached the screenshots of the WhatsApp conversation between her and the PTV person as proof.

Nida shared how she went for the audition for a PTV upcoming drama and gave her best performance. The directors were also impressed with her acting stint. She was sure she’ll get this opportunity and she did receive a message from the PR person at night regarding her selection for the role.

The screenshots she has attached with the written post narrated the level of conversation, Nida Malik further wrote that the PR person again texted her and said that even though she has been hand-picked for the role, it will certainly be her’s only when she “compromised” with him. And if she doesn’t, she won’t get that role.

The person shamelessly asked her to spend time with him and when she reverted with questions, he retorted saying that the whole matter will be hush-hush and she just has to spend  one hour with him.

When Nida rejected his inappropriate offer, he told her to take some time and think about it. However, as soon as Nida bashed him, he replied with a simple ‘Bye’.

She took a leave with the #MeToo hashtag emphasizing that such people are not more than dishonor and shame for Pakistan’s entertainment industry.

Saba Bukhari, the Dil Na Ummed Toh Nahi actress shared a piece on her Instagram account about how the culture of the casting couch has overwhelmed her. Saba isn’t the first one to talk about this practice of asking for inappropriate sexual favors from actors and actresses in return for a role in a show.

Saba Bukhari shared a melodramatic and captivating picture on her Instagram account. The actress also jotted down a caption through which she disclosed the details of her first-hand experiences with the casting directors and producers of Pakistan.

The actress put down:

Someone said- You don’t have that much confidence to go ahead in this media (entertainment industry).

Someone said- The matter is that you are a good girl and good girls don’t work in this field.

Someone said- How is this even possible that nobody has ever tried on you.

Someone said- Why should I give you money as well as work when there are so many girls who are ready to sleep with him in exchange for work.

Saba later added that all these words and lines from different men have broken her and her dreams from inside.

You all meet Abdul Majid Khan – the guy who desired to become an actor but was thrown off as he didn’t fulfill the sexual desires of a casting couch.

Abdul Majid shared on Twitter about his dreadful encounter with a person who wanted to have sexual favors from him in return for giving him a chance to make it big in the Pakistani industry.

Abdul mentioned back in the year 2008 a young Karachi boy aspired to become an actor. He came forward with an advertisement in the Sunday classified of Jung Newspaper.

He added that the ad said something like this ‘Looking for a fresh face for a drama serial. Contact on this number.’

Abdul made it clear that the boy whose story he is narrating belonged to a poor family and to make some pocket money he used to give tuition classes.

The boy contacted the mentioned number and the receiver told him to reach Samama Shopping Center and after reaching there call him back.

The boy got dressed up in his best clothes and reached Samama Shopping Center by bus. And called the number again.

The receiver told him to come to the 4th floor of the shopping center. The boy went there and found all shops were closed after the 4th floor.

Except for one shop. There were some hanging frames of paintings and calligraphy for sale purposes.

Boy found out a fat man was sitting in the shop. The man greeted the boy and confirmed that he’s the boy he was talking to. Further, he complimented the boy for his looks.

The boy was a bit hesitant while the man was introducing himself that he’s Premi and he’s an actor, producer, director, and writer as well.

The man picked up a box from his side and opened it to show some stuff to the boy. He showed his pictures with Shan, Saima, and Moummar Rana.

The boy got perplexed. But Premi was continuing with his rant. He said see first I’ll take your audition and then I’ll decide what to do with you.

Furthermore, Premi asked for 500 bucks from the boy. The boy got more confused but then gave him the asked money.

The boy thought that his audition will happen in some theater-type place and that’s why Premi is charging him as an agent.

But to his utmost surprise, Premi handed him over a piece of paper in that shop and told him to read it and then deliver the dialogues with full emotions.

Premi got impressed with the performance of the boy and complimented him by saying the boy will become a fabulous actor and he’ll make sure to provide him a chance.

Premi added that he’ll take the boy to several places for screen tests and there’s an upcoming drama on ARY in which he’ll ensure that the boy gets a role.

Then Premi asked the boy to sit next to him and started a serious lecture with him.

Premi said this field is very tough and here people suffer a lot due to hard times. And the boy will be supposed to walk on a road full of obstacles.

While giving the lecture talk to the boy, Premi’s hand started caressing the thighs and reached the crotch area of the boy.

The innocent boy got confused but Premi tried to comfort him by saying see to get success you have to do something and moved his hands to the zipper of the boy’s trousers.

The boy jumped from the sitting area in a jiffy and was scared to the core. He said Sir I’m leaving. Premi tried to grab the boy’s hand by saying at least sit-down.

But the scared boy pushed Premi away and ran towards the door. Premi was cursing him from behind and said bastard come back.

The 19-year-old boy jumped 4 stairs at a time and kept running till he reached Johar Chowrangi from Samama and didn’t look back.

In the last tweet, Abdul clarified that the boy whose story he was narrating was him only.

We know all these encounters are disgusting to read but that’s the reality of today’s entertainment industry.

In interview with OkPakistan sarwat also shares her point of view about Casting Couch in Pakistani Entertainment Industry.

Firstly, it’s pretty lionhearted of Nida, Saba, and Abdul Majid to even come up with their stories and share them with hundreds of readers. People usually don’t prefer talking about such horrible encounters, but if it helps in educating someone and making them vigilant of the dreadful things that exist in this world, the topic certainly has to be discussed openly.

The culture of couch casting does exist in Pakistan and one needs to be extremely careful about it.