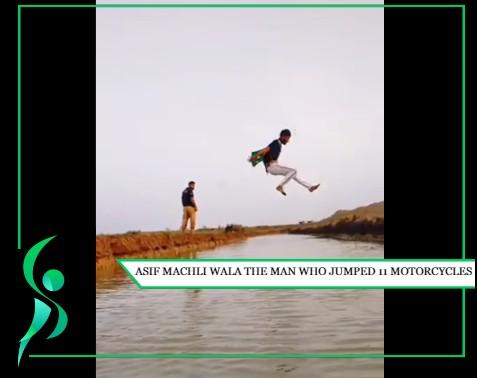 In a recent post, twitter comes up with a video of an athlete named ‘Asif Machli wala‘ who belongs to the region Thatta and this video of his energetic act gone viral all over the internet and there is no doubt that he could represent Pakistan in Olympics as his potential and energy seem very inspiring.

In the video, a raw and unfamiliar athlete Asif Machli wala who is also considered as a very young fisherman is observable attempting an act of jumping 11 motorcycles and landing back on the ground standing straight in the air which is most likely to be a long jump and could wander as a capable candidate for the international long jump contest.

The user who shared the video on Twitter, as well as the people, are mesmerizing this man talent’s and praising him for his excellent and unvarnished skills. Can you even imagine jumping 11 motorcycles? The Twitter user again uploaded a video of Asif Machli wala, the celebrities, and well-known names are appreciating his talent.

After his clip went trolling around the internet, his video received quick views and gone trending for up to 744,000 views just in minimal time. Famous stars such as Ali Zafar, Fahad Mustafa, and Shaniera Akram sharing the previously viral video with some positive labels.Shaniera Akram on the other hand, lauded the talent. And upon finding out that he has now been approached by the Athletic Federation of Pakistan, she couldn’t contain herself as well.

All of them have quoted positive remarks and lauded this amazing talent of Asif Machli Wala. Shaniera Akram spoke that if he could also appear in cricket too? There is no denying that his skill can take him a long way.