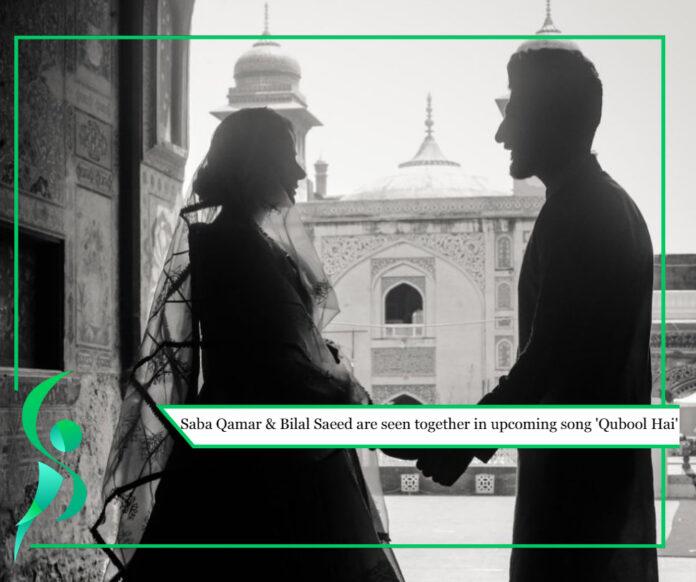 In a recent Instagram post of Bilal Saeed, he shared a picture with himself and Saba Qamar hinting all fans about their relationship and giving an enormous amount of rumors trolling all around the internet but they both cleared it off by sharing the official poster of their upcoming music video “Qubool Hai”.

On his Instagram account, He has shared some highlights and first looks at his new music video which shows the premiere appearance of Saba Qamar in his upcoming song ‘Qubool Hai’. The song is composed and produced by Bilal whereas the music video is featuring both Saba Qamar and Bilal.

The followers and fans of the Pakistani actress begin on giving barely positive compliments but mostly negative as well. Some of the fans also giving best wishes on her wedding with Bilal but later on, it was all deciphered that Bilal is already a married man with a child. She later confirmed her upcoming song making with Bilal Saeed. She claimed that  “We have got a new director in town! A little surprise for all of you coming very soon. Directed by @sabaqamarzaman.”

In the highlights of the music video, Saba Qamar Zaman is seen wearing a very pleasing and golden classical outfit by designer Mohsin Naveed Ranjha whereas, Bilal Saeed is wearing a traditional white kurta pajama and a masjid to have appeared at the horizon of the poster. Although the official date of the song is not revealed yet. All we could have it on is coming soon.

Have Anything to add up? Give your opinion in comment section below.