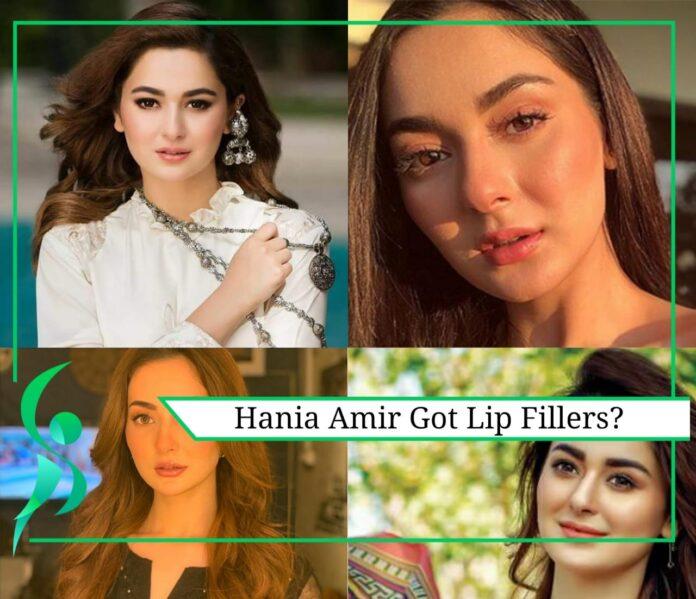 Planning on lip surgery? we recommend not to go for it! as Hania Amir Lip Fillers go wrong and fans couldn’t help but troll her. The ever so bubbly and charming Hania Amir caught people’s attention when she shared her latest selfie.

Hania Amir started her career as a supporting actress role in the film Janan; the actress won hearts with her cute dimples and acting skills. The actress is always praised for remarkable performance throughout the years. The actress’s lip fillers are quite visible in her latest pictures and videos.

Hania is always been in the limelight whether with her acting or charming smile. The actress’s relation with Asim Azhar was the talk of the town and people believed that the duo was dating each other! Later the actress made the huge revelation that both are “Just Friends” and nothing more, the video went viral was Hania revealed she is still single!

The shared amazing chemistry and we wish them luck for future endeavors!

Hania Amir’s latest drama serial “Dilruba is currently on air and fans are loving her as Sanam. Hania also did films after her debut films like Na Maloom Afrad and Parwaz Hai Junoon, opposite Hamza Ali Abbasi which was a big hit.

Hania is usually seen given prefferance to small screen projects.

Hania Amir’s all hit drama serial Anna, Ishqiya and Pyaar Kahani in which Asim Azar was opposite her and fans loved their on-screen chemistry!

Hania Amir, this girl surely knows how to captures people’s attention she can heads turn around easily. Hania was loved by everyone when she goes backless for an event!

Hania’s lip fillers are not liked by her fans, do let us know about your thoughts in the comment section below. Stay tuned for the latest happenings of Pakistani Showbiz!