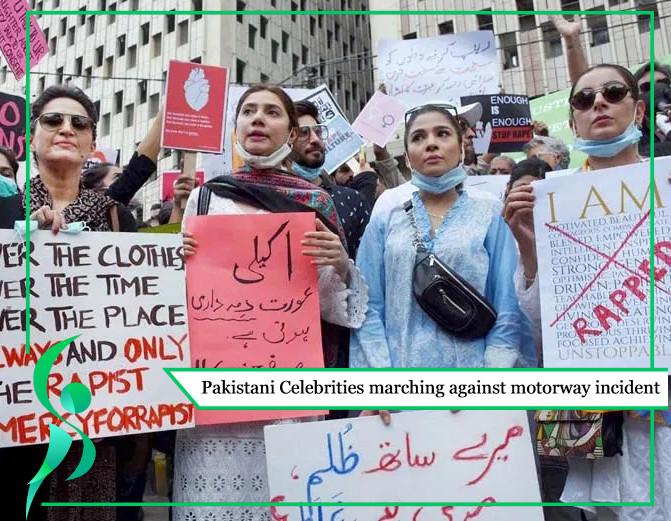 Recently, a horrific motorway incident happened in Lahore. Which brought up the anger and hundreds of questions about the safety of citizens of Pakistan. It has been raised regardless of concerns about rape cases that don’t specify based on gender. We have seen the bulk of people protesting against the rape cases happening in Pakistan. Now the Pakistani celebrities have also come along the way to show their grief and to stand against violation and rape scandals.

The rape incident happened on Tuesday night around 2 AM at Lahore motorway. A gang of robbers rapped a mother who was driving along with her two children at Motorway within Gujjarpura police’s jurisdiction. After this horrible incident happened it was brought up on all social media platforms demanding justice and brought up this incident into wider space. It was all over Facebook, Instagram, and all social platforms. People were started pushing up this incident especially women all around Pakistan showed the unity against this horrific incident. They all started to demand rights and severe punishment to the Merciless and hang them publicly to set an example for such monsters in our society and demanding for a secure nation to live.

Famous Pakistani celebrities like Ayesha Omar, Mahira Khan, Faisal Qureshi, Ali Rehman Khan, Yasir Hussain, and other iconic stars have seen together protesting against the rape cases which was organized by the media fraternity at Karachi Press Club.

This remarkable footage shows that our Pakistani celebrities also stand against evil and they are also the responsible citizens of our country. And they also took an active part in bringing up to not only the justice to the motorway happening but also rape cases.

Well, we hope that the felons would get behind the bars or get the shameful punishment as soon as possible to set an example for all rapers. Share your views in the comment section below.