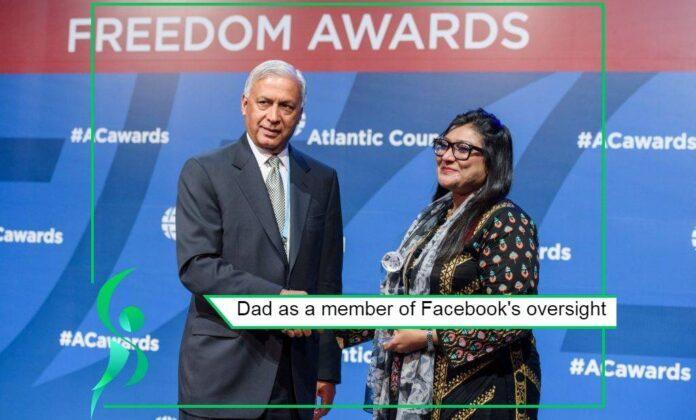 Pakistani digital rights advocate, Nighat Dad has been named as member of Facebook’s  independent oversight board that can overrule the company’s own content moderation.

Facebook announced a group of 20 members, including four co-chairs who helped select the others. The board, which is expected to start hearing cases this summer, is planned to grow to about 40 members.

Dad, a human rights award winner and founder of Digital Rights Foundation Pakistan is looking forward to the new role

The new oversight board, which some have dubboleed Facebook’s “Supreme Court,” will be able to overturn decisions by the company and Chief Executive Mark Zuckerberg on whether individual pieces of content should be allowed on Facebook and Instagram.

“With our size comes a great deal of responsibility, and while we have always taken advice from experts on how to best keep our platforms safe, until now, we have made the final decisions about what should be allowed on our platforms and what should be removed. And these decisions often are not easy to make – most judgments do not have obvious, or uncontroversial, outcomes and yet many of them have significant implications for free expression,” according to the company’s website.

“We’re not working for Facebook, we’re trying to pressure Facebook to improve its policies and its processes to better respect human rights. That’s the job,” board member and internet governance researcher Nicolas Suzor told Reuters.

Facebook has long faced criticism for high-profile content moderation issues. Hence the oversight board will focus on a small slice of challenging content issues including hate speech and harassment and people’s safety.

The board will start work immediately and it would begin hearing cases this summer.

Nighat Dad says she cannot help but see the similarities between herself and Baloch.

They are from similar backgrounds, both left abusive marriages, and both have gained fame by loudly challenging social taboos online though admittedly not in quite the same way.

Her murder “shook me badly,” she tells AFP.

“It was enough to shake us all.”