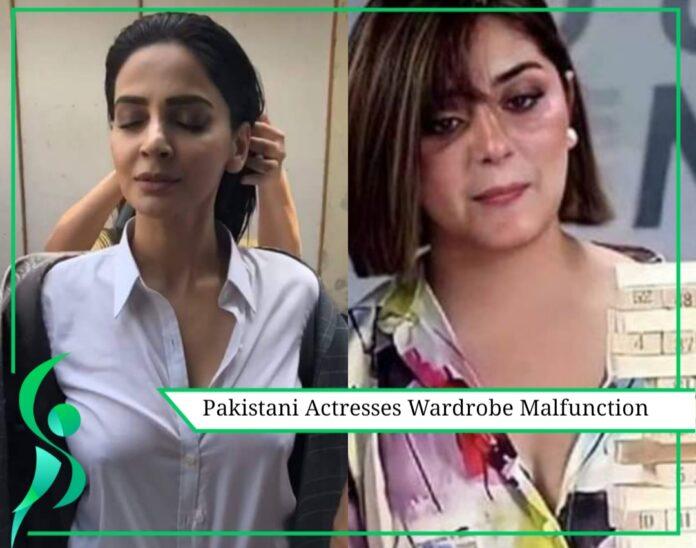 Pakistani Actresses never fail to win our hearts with their acting skills and fashionable attires. They appear so flawless, perfect, and comfortable in their attire and the way they carry them becomes an inspiration to many people. Nevertheless, there were moments when their exquisite clothes revolted against them due to which they had to face many criticisms and negative comments from their haters on the internet. The wardrobe mishap has happened many often with many celebrities and models that became the reason for their humiliation.

Pakistani famous actress Saba Qamar was targeted and trolled by haters for her personal photos which were leaked online on the internet. In these photos, Saba Qamar was seen wearing a white shirt that was inappropriate according to many haters because of some of their logic on morality. The photos were ‘Behind the Scenes’ photos which were leaked without her permission. The haters did not stop their criticism there, some of them even crossed their limits by slut-shaming Saba Qamar. But the fans responded very well to all the backlashes and supported her during the hard time.

VJ turned Pakistani actress Mawra Hocane who played the lead role wonderfully in Bollywood movie Sanam Teri Kasam has also faced the incident of a wardrobe malfunction during one of her events. The incident happened while she was seen wearing a beautiful white dress with confidence while attending an event organized by Fair & Lovely Pakistan in Karachi. Though the incredible beauty with a confident smile and perfect makeup was enough to make people notice what she wanted to get noticed among her fans and the malfunction hardly made any difference.

The charming actress Alizeh Shah faced criticism for wearing a loose-fitting shirt in a video of the launching of a mobile phone with Actor Feroze Khan. Her social media accounts were full of people giving their unwanted opinion about her dressing style. Many people were remarking her clothes as obscene and outrageous. She was also subjected to foul language and profanity. Though, this was not the first time she has faced backlashes from haters for wearing clothes of her choice whether in the award show Hum Style Awards or her song Badnamiyan. She has also given her best reply to the critics and haters saying that she finds all the memes and criticisms amusing.

The question is, does it really matter whether it was her bold looks or wardrobe malfunction? Nobody deserves to be subjected to so much hatred and harsh criticisms.

One of the famous Pakistani actresses Meera Jee came into controversy when some of her photos from social media went viral. Many people on the internet were saying that it was an ‘oops moment’ for the actress after looking at the photos. The actress was

looking magnificent wearing a high neck shirt and pants while travelling over New York City. Where the mind-boggling photos of Meera Jee were being applauded by her fans meanwhile haters and critics found a way to target the actress by saying that Meera’s pants were left unzipped. Many of the fans denied the allegation and showed their anger toward the absurd allegation.

Pakistani sensational actress Veena Malik suffered from a wardrobe malfunction when she was having a photoshoot for promoting her film ‘Supermodel’. She was wearing an attractive dress where there was a nip-slip. Though, there was no confirmation by the actress herself that if it was a wardrobe malfunction or she has done it with her discretion. The actress constantly stays in limelight for different reasons.

Pakistani film actress Irtiza Rubab known by her stage name Meera is said to have faced wardrobe malfunction at Red Carpet. She was wearing a glamorous and resplendent dress which was looking fabulous on her.

Pakistani model Kesha Siddique faced a wardrobe malfunction while walking the ramp on the third day of Fashion Pakistan Week. She broke her sandal’s heel while ramp walking. But in this story, you will find an amazing example of how to fix the wardrobe malfunction. So,

when Kesha broke her heel, another fellow model Subhan Awan came out to help her by bending down to try to fix the sandal. After a lot of unsuccessful attempts when the sandal could not get fixed, Subhan Awan helped the model take off both her sandals. Then, both models proceeded to complete their walks in the show.

Pakistani model Mathira has also been a victim of a wardrobe malfunction during one of her shows. The incident happened when she was performing a ramp walk during Fashion Pakistan Week. Mathira Mohammad was wearing a white top that accidently fell down and she was left partially exposed. The admiration she gained after that was well deserved because she continued walking after putting the top in order in a very confident way. Many critics started alleging that she has done it deliberately to come into the limelight. But she took all the backlashes very calmly by stating on Twitter that, s*** happens at fashion week.

Pakistani actress and one of the leading models Fouzia Aman of Fashion Pakistan Week has suffered from a wardrobe malfunction on ramp at a show sponsored by Coca Cola in Karachi. She was wearing a stunning golden dress which was looking phenomenal. The actress did not let the nip slip which occurred accidentally during the ramp walk came in between her career and continued to walk confidently like a professional which she is.

Pakistani actress and model Sara Hussain, better known as Sara Loren, works in Hindi as well as Urdu television. She has also gained fame working in many Bollywood movies such as Murder 3, Barkhaa, Ishq Click and many more. She suffered from a wardrobe malfunction when she was shooting a romantic song Ishq Click with an Indian actor Adhyayan Suman