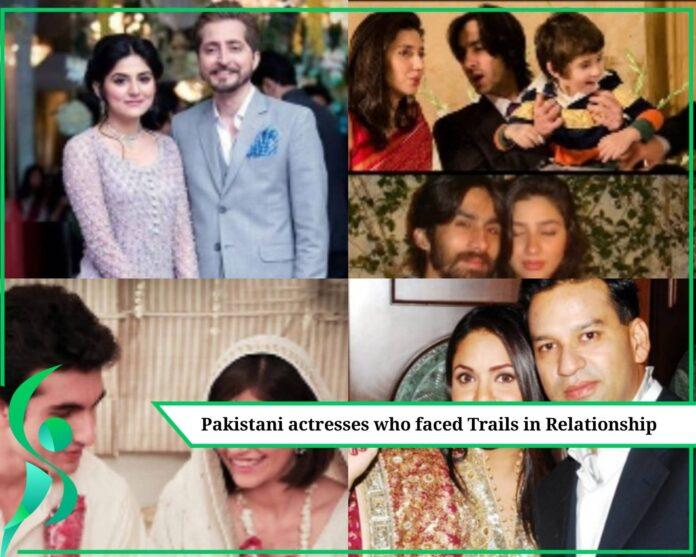 Marriage is the extremity of completeness. But in real life, often complete and successful things need work to keep them sustainable too. In reality, everything that shines has scars, and people mostly part their ways before death pulls them apart. Often, it’s been witnessed that between two people, no matter how rich, beautiful, and talented they are, their gaps grow, gaps of uncertainty and misfortunes, and there is a failure to nurture the pious bond of marriage.

The relationship struggles are not new to the showbiz industry of Pakistan too. We have been seen its emergence very adorable love stories, but which are side by a couple of sorrowful breakup stories too. There have been a number of unfortunate incidents when the couple due to unavoidable circumstances had to move apart. Here is a list of Pakistani actresses who unfortunately got divorced.

Mahirah Khan married Ali Askari on July 13, 2007. At that time, the husband Ali Askari was the head of MTV. The couple enjoyed blissful married life for around eight years and had a son named Azlan together in 2014. Right after her successful release, the drama serial HUMSAFAR, conditions started to turn their face from her.

Though she never revealed the reason for her divorce in media, once in her interview to a leading English newspaper, she said about her divorce with Ali Askari with the statement,

In another interview, she firmly stated that Azlaan was her only priority at the time, and she even had to let go of some good work at the time. She quoted,

Syra Yousuf and Shahroz Sabzwari announced on Saturday, February 29, that they had ended their marriage due to ‘irreconcilable differences.’

They tied the knot seven years ago and have a daughter named Nooreh. The rumors regarding their divorce had started to revolve around social media right in December 2019, when the two separated about six months earlier. Followed by this, Shahroz uploaded a video on his Instagram, explaining the difference between a separation and divorce, and clarifying that any basing against Sadaf Kanwal was condemnable. In addition to this, speaking to The Express Tribune, Shahroz’s father Behroze Sabzwari also said,

When Sanam Baloch changed her name from Sanam Abdullah Farhatullah back to Sanam Baloch on Instagram a couple of months ago, people went crazy to know what had happened.

Although she had not shared about the reason, they parted ways, but one of her messages to all the young girls pointed out that Sanam did not want someone in his life to dictate things to her. She further mentioned that she and Abdullah thought that their friendship would only grow if they get married, but the time has proven them wrong.

There might be no information about Nadia Khan’s first husband, but in some show, she did admit that she had been married once before she got married to Khawar Iqbal. She was living with her second husband, Khawar Iqbal, in Dubai, and she used to host her morning show from there only. They had two children, a daughter Alizeh and a son Azaan. It was Nadia Khan who filed for divorce in 2012, and then she moved to Islamabad and took time off from the media.

Nadia Khan had never spoken about her marital issues but every now and then, she has been hinted how she was been dishearten while being mistreated and cheated by her spouse. Nadia Khan has shown to the world her strong character and how she is rocking her role as a single mother.

Most of the time, actors are assumed as people from some other planet or having some inhuman characteristics who have perfect lives and could not have any of the struggles. It is the most common view of the public about celebrities and their lives because people make assumptions about them based on the snippets of the experiences that they come across. However, the stars are just ordinary human beings, having a fair share of happiness and trials too. By the use of social media as all or most of the celebrities are using it, people can now see the humanized version of personalities and their lives. They now believe in transparency with their fans and followers, and it is the reason why we got to know about any struggles or hardships they are facing or have faced in the past. It is also the way for people to connect and relate to their favorite celebrities. It also enables celebrities to influence the lives of their fans and supporters by guiding them and teaching them life lessons based on their personal experiences.

We would love to hear what you think of this. Let us know in the comments section or at [email protected]