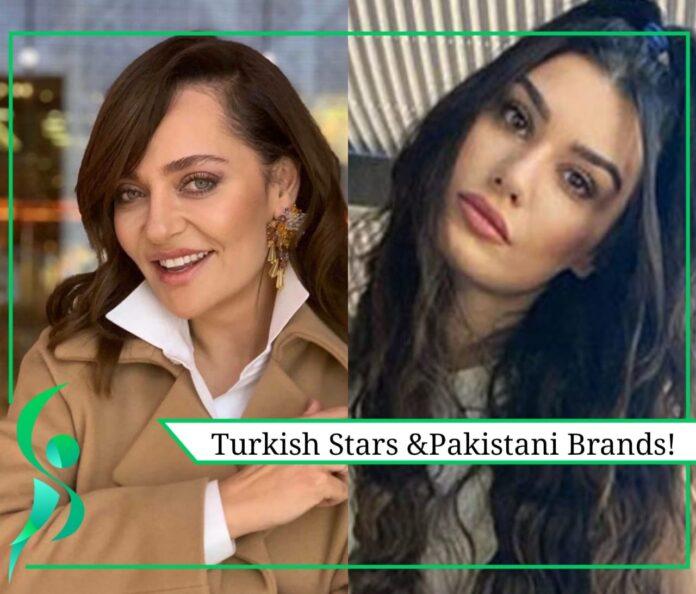 Turkish fever is still on, as Pakistani top designers consider Turkish stars to be the brand’s face. Pakistani designers are always known to lead the way and leave no stone unturned in the fashion industry game. And Pakistani’s have mixed feelings about it.

After the famous drama serial Diriliş: Ertuğrul, we can see an absolute obsession with Turkish culture and, most importantly, Turkish actors. The leading actress of the drama Esra Bilgiç also signed a couple of big brands as a brand ambassador.

The hype is real we can see it now, one after another we have seen big brands of Pakistan signing Turkish actors and actresses as a brand ambassador. Lately, one of the top designers like Maria.B and Ali Zeeshan.

Moreover, the Pakistani actors have mixed opinion too about the idea, the Pakistani who loves to be in the limelight because of his witty and blunt remarks also got into trouble for his words, and the Turkish actress takes a dig at Yasir Hussain. Pakistani top designers always like to be ahead in the game of FASHION and to think out of the box and this time Turkish actors are the face of Pakistani brands.

One of the top designers of Pakistan Maria.B signed Didem Balcin as her brand ambassador for her winter collection and is in Turkey these days for the shoot. Whereas another top designer Ali Zeeshan signed Burcu Kiratli for his bridal collection.

What do you guys think of such ventures by Pakistani top designers? Do you think it is a bad move or a good move by Pakistani designers to sign Turkish actors and not consider Pakistani actors anymore?