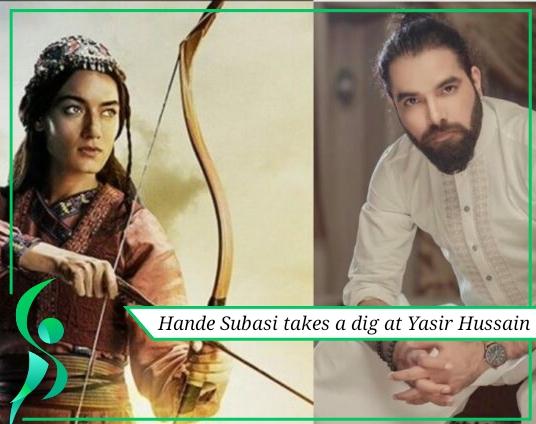 Since the now very famous Turkish series “Dirilis:Erugtul” started airing in Pakistan Yasir Hussain has been very bitter towards the Turkish actors and Pakistani fans having a liking for it. He has been seen critisizing the series and has even claimed that the Turkish people are stealing the spots from Pakistani talents after they had started endorsing advertisements for Pakistan.

The people had had enough of Yasir’s trash talk towards the Turkish talent hence the hashtag #YasirHussainIsTheRealGarbage started trending on Twitter. People were very sick of Hussain always looking down on the Turkish drama and the actors and took to Twitter to express their rage.

Hande Subasi, who plays “Aykiz Hatun” on the show Ertugrul also called out Yasir Hussain on his rude remarks pointed towards the Turkish talent as enough was enough now! She tweeted:

She stated that Yasir is an attention seeker and does not represent Pakistan at all! And we dont think she was at all wrong 😀

What do you guys think about this tweet? Is Yasir Hussain right for claiming all that he is about the Turkish actors? Or are you in agreement with Hande? Let us know