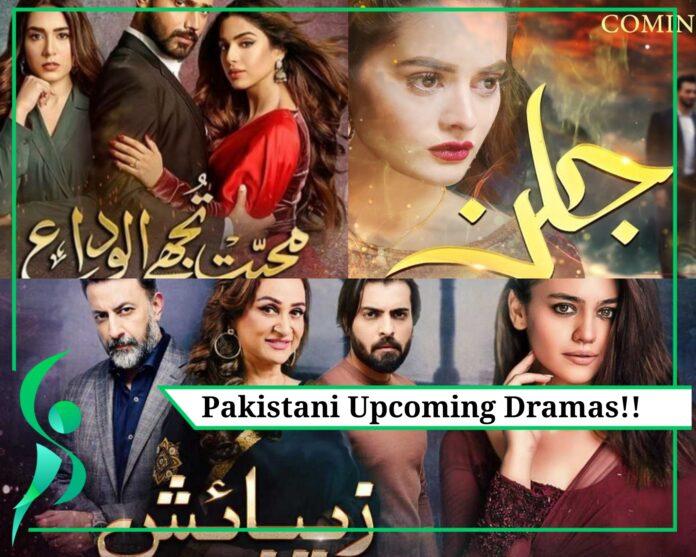 Pakistani Drama Industry has been growing rapidly with the creation of quality content and everything has been made attainable with the amazing acting talent in all of the drama serials. For the housewives and the ones who mostly favor staying at home, these dramas are the only cause of entertainment and thus this industry has never lost in its repute over some time.

Although there is a long list of quality dramas being on aired on different channels these days but everyone is looking forward to the new stuff so that they can add them in their watch list. So here we have compiled a list of all those new dramas which have been on aired or soon to be showcased on different entertainment channels with some intro to let you know about what you can expect from these new entrants in the watch list. So here you go!

Prem Gali is Pakistani Upcoming Drama which is romantic comedy television series listed to premiere in June 2020 on ARY Digital. It is written by Faiza Iftikhar, led by Qasim Ali Mureed and created by Humayun Saeed under Six Sigma Plus. It stars Farhan Saeed and Sohai Ali Abro.

After the success of the 2017 family sitcom Aangan, the director Qasim Ali Mureed, writer Faiza Iftikhar and producer Humayun Saeed decided to reunite for another project with a light-hearted comedy theme. They announced the Project in July 2019.

The Producer chooses Saeed and Abro for lead characters making it their second on-screen collaboration mutually after De Ijazat Jo Tu. The producers also repeat some Aangan artists including Qavi Khan and Uzma Hassan. Shooting started in December 2019. Determined to be premiered in early 2020, it was postponed amid the COVID-19 outbreak due to some incompleted shoots. The series is now supposed to broadcast from June 2020.

Khani Directed Anjum Shehzad, presenting Pakistani Upcoming Drama serial titled as Abdullah Pur Ke Devdas, it also stars Raza Talish, Saad Quraishi, Savera Nadeem, Anoushi Abbasi, and young actor Shehroz Khan with the main cast as Sarah Khan and Bilal Abbas. According to news, famed playwright and novelist Umera Ahmed’s company ‘Alif Kitab Publication‘, is involved in writing the script for it. While Umera herself won’t be penning the script, one of her new writers Shahid will be drafting it under her supervision.

Zebaish is a 2020 Pakistani Upcoming Drama series premiered on 12 June 2020 on Hum TV. It is written by Bushra Ansari, directed by Iqbal Hussain and produced by Momina Duraid under their banner MD Production. Based on the life of actors in the film industry, it features Zara Noor Abbas, Asad Siddiqui, Zoya Nasir, Bushra Ansari, Asma Abbas, and Babar Ali.

After the experience of working with Zara Noor Abbas, Asma Abbas, and Bushra Ansari in historical drama Deewar-e-Shab, Iqbal Hussain decided to cast the same trio in the upcoming project. In October 2019, the serial was announced by Abbas through her Instagram account. It marked the second on-screen collaboration of real life couple Abbas and Siddiqui after Challawaa. The first and second teaser released on 8 May 2020 saying that it would released after Eid from June 2020.

Mushq is a Pakistani Upcoming Drama series to air on Hum TV in 2020. The lead actors starring in this show are Urwa Hocane and Imran Ashraf. Imran Ashraf is also the writer of this play.

You may know Imran Ashraf as a talented actor but the guy is a talented writer as well and wrote the mega-hit Tabeer a few years behind.

Now he is back with Mushq his second play as a writer that will also star him in the lead alongside Urwa Hocane. There seems to be an exemplar to Imran Ashraf’s dramas, because both the times he has co-operated with Aehsun Talish who is currently riding high due to Yeh Dil Mera due to its seductive theme.

In October 2019, It was stated that Urwa Hocane will make a comeback on TV screens with Mushq beside Imran Ashraf and Script will be written by Ashraf himself. At Bol Nights Kubra Khan and Gohar Rasheed stated that they will be part of Mushq but next on they dropped it. Further, it was announced that Momal Sheikh is compensated by Khan and Gohar Rasheed by Osama Tahir.

Spotlight decided to talk to Imran Ashraf and Aehsun Talish regarding their upcoming project, and how do they feel on collaborating once again.

Jalan is a Pakistani Upcoming Drama series scheduled to premiere on ARY Digital from June 2020. It is produced by Fahad Mustafa under Big Bang Entertainment. It stars Minal Khan, Emmad Irfani, and Areeba Habib. The first teaser of the series premiered on 3 June 2020.

In November 2019, it was announced that Minal Khan, Areeba Habib, and Emmad Irfani were collaborating on the project. As Minal Khan appeared as an antagonist for the first time in her career, she commented that through playing the character of Nisha, she hoped to “bring versatility to her work”

The plot revolves around a charming couple played by Zahid Ahmed and Sonya Hussyn from a middle-class background. Like every married pair, they have wholesome desires to make their life just perfect. One of them has a love for money and the greed for money which will make their relationship face the test of time.