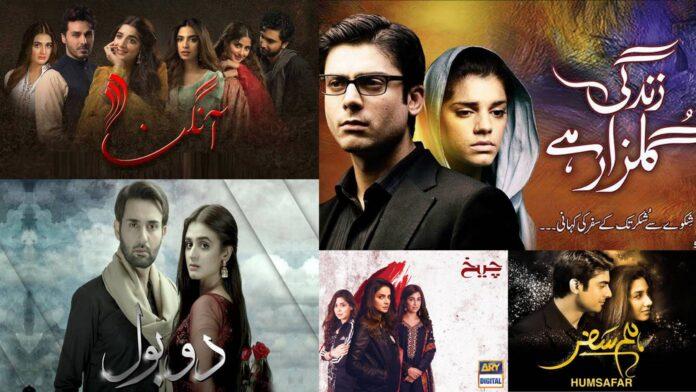 Drama industry of Pakistan had only one channel in the 1990’s which was PTV and people used to wait anxiously for the dramas to get aired so that they could watch them. During this era, many exquisite dramas were aired such as “Dhoop Kinaray,” “Dhuaa’n,” “Ankahi,” and “Tanhaiyaa’n.” Significant history has been made by Pakistan’s drama industry in which very impressive messages of real life scenarios were delivered through the marvellously written storyline. Even in the present times, drama industry has received a great amount of praise by the people of Pakistan.

“Zindagi Gulzar Hai” is the most hit drama of Pakistan drama industry which directed by Sultan Siddique, produced by Momina Duraid of Moomal Production, and broadcasted on HUM TV. It is based on the same named novel by Umera Ahmed which was her masterpiece work. Not only Pakistanis loved it but the show was also praised by the people in various other places like the Arab countries, European countries, Iran, and India.

It is a story of two different people namely Kashad Murtaza (Sanam Saeed) and Zaroon Junaid (Fawad Khan) with different mentalities and financial status. The genre is romance and was released on 30 November 2012 and ended on 24 May 2013.

“Do Bol” is the current romantic second hit drama of Pakistan which is directed by Syed Wajahat Hussain and produced by Humayun Saeed and Shahzad Nasib under Six Sigma Plus, which premiered on ARY Digital. Story of this extremely heart touching drama is written by Sarwat Nazir.

“Do Bol” has three main leading actors that are:

The show is a combination of love and misunderstandings between Gaiti and Badar. Because of the many misinterpretations, the two characters go through several hardships. The beautiful portrayal of these hurdles is what made “Do Bol” a big success within the Pakistani drama industry. Its genre is romance and was released on 5th March 2019 and ended on 5th May 2019.

“Cheekh” is a crime-drama series created and published by Fahad Mustafa and Dr. Ali Kazmi under the production house of Big Bang Entertainment. This show which was aired on ARY Digital is a melodrama written by Zanjabeel Asim Shah.

The actors featured in “Cheekh” are as follows:

“Cheekh” is one of the best serial in which justice for the rights of the lower-class society is being highlighted and it is encouraged through the central idea of the drama that one should raise voice to protect his/her rights. Immensely talented actress Saba Qamar, played this role of fighting for the right of her closest friend Nayab who was killed by Wajih out of aggression. Mannat, who is an amazingly outspoken and a strong headed woman lost her husband, mother, and her child in the process of raising voice for the just. She finds Wajih as the culprit for the injustice done to Nayab and fights through all the hurdles just to expose the truth. On the other hand, Wajih is shown as a cunning man who has the ability to manipulate any situation in his favor.

“Humsafar” was a hit drama of 2011 which was created by Momina Duraid based on a novel written by Farhat Ishtiaq. It was directed by Sarmad Sultan Khoosat and aired on HUM TV.

Plot of the story revolves around the trials and adversity of a married couple Khirad (Mahira Khan) and Ashar (Fawad Khan).

Its genre is romance and family drama.

“Humsafar” has won many awards in 2012 and 2013. For instance, in 11th Lux Style Awards, humsafar won three awards for best song of the year, best serial and the best soundtrack.

“Aangan” is a Pakistani period drama series which is based on same named novel written by Khadija Mastoor. It was produced by the talented producer Momina Duraid and directed by Mohammad Ehteshamuddin. The show was aired on HUM TV from 20 December 2018 till 27 June 2019 with a total of 27 episodes.

Although “Aangan” is a 1918 based drama, the problems the characters are shown having are still relevant in current times. For example, Jameel is shown as chasing his dreams and Chammi making sacrifices for the sake of her love. These concepts are still relevant and thus people can relate to the show immensely.

Cast of “Aangan” is:

Its genre is period drama and 89% liked this show.