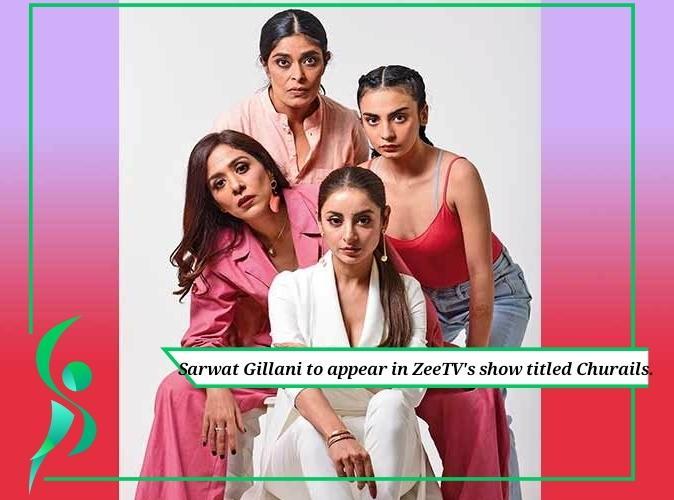 Sarwat Gillani’s starrer Churail is all to set to release on 11 Aug 2020, also starring Nimra Bucha, Yasra Rizvi, and Mehr Bano alongside on ZeeTV digital platform.

The much-acclaimed film Cake director, Asim Abbasi’s new project has brought four women in a power-pack performance, who open a detective agency to expose their cheating husbands in front of the elite society of the country. The powerful narration is beautifully done by Yasra Rizvi.

The synopsis of the drama is described below,” She who takes ownership of her life and unapologetic of her self-being. She, who breaks the glass ceiling and every prejudice that society has created against women. She is strong, she is fierce, she stands for what she believes in… she is a CHURAIL.”

Talking about her character, Sarwat Gillani has stated that,” She is not a perfect wife, there is more than anyone’s imagination”.

Sarwat Gillani’s Churalis has Yasra Rizvi in the lead role, whose character is titled as Jugnu Chaudhary. The character is smart and badass and claimed to be the queen of this whole Jungle. The description of other characters is yet to be revealed.

The four Churalis is all set to bring a revolution, brought by heros donning a burka. The story also covers different harsh realities of society, also it aims to challenge the hypocrisy of a society related to women and their rights. The directed has shared views on his project, stating”Its a story about strong women, embarking on a journey of self-discovery, empowerment, and sisterhood, I believe Churails is a timely show with pertinent themes that will resonate with audiences globally.”

The show premiered on ZeeTV of Sarwat Gillani’s starrer has raised the bar high already, and a lot of celebrities have to extend wishes to the team. We are also quite excited and wish the team all the best. What do you guys think? Please share below in the comments.