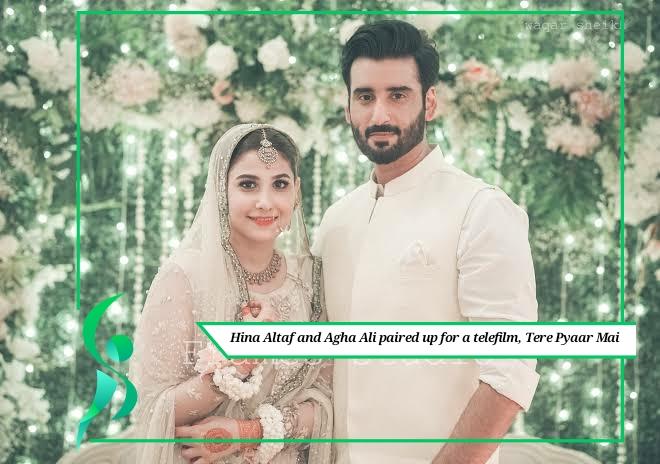 The telefilm named “Tere Pyaar Mai”, will be on aired on Geo TV on the second day of Eid, starring the newlyweds and much-loved couple, Hina Altaf and Agha Ali.

Tere Pyaar Mai is produced by the powerful duo of the industry, Abdullah Kadwani, and Asad Qureshi. The telefilm is directed by Saima Waseem and written by Samra Bukhari, it also marks the appearance of veteran actress Hina Khwaja Bayat in the lead role alongside the newlyweds.

The teaser of the telefilm has been released, which illustrates beautifully captured romantic scenes between the real-life couple, Hina Altaf and Agha Ali.

Hina Altaf took Instagram to share the first poster of Tere Pyaar Mai and thanked her fans wholeheartedly for the unconditional love and support. It is a treat and a small dedication for the followers of the duo.

The duo married this year during the lockdown, and have updated their fans about their happenings now and then. The fans are quite excited to see them together after their marriage. Well, we have to wait till then, if they lived up to expectations or not.