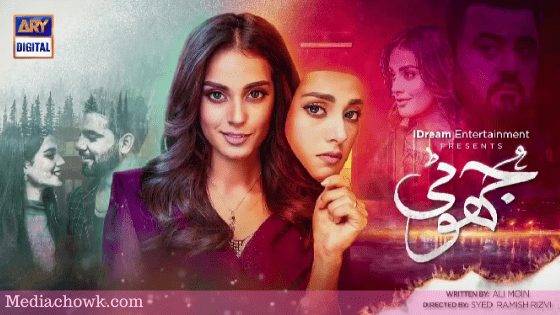 The newly weds Iqra and Yasir had been posting the BTS of their new drama since a long time now and finally the trailers of their drama are out. This is the first time Iqra Aziz will be sharing the screen with her husband Yasir Hussain in ARY digital’s “Jhooti.”

Another lead actor who’ll be working alongside the duo is Ahmed Ali Butt who is quite known for his comedy. This serial is directed by Syed Ramish Ali, penned by Ali Moin and it is the production of Abdullah Seja.

Two teasers of “Jhooti” are being aired, the first one is not so bad or problematic. It shows Iqra as a tough and irrepressible woman.

But, it was the other trailer which caused an outrage on twitter. A bruised Iqra Aziz, on the verge of tears is calling out men on the abuse of power and pointing to her bruises as a proof. But soon her tears turn into laughter telling us that it was all a show, making the title “Jhooti” true for her character.

Now, the audience is not okay with domestic violence being made fun of as a lot of women are subjected to violence by their husband or in laws. Our country is already ignorant of domestic violence and this drama has so easily portrayed those women as liars.

The indignation of Twitteratis:

But, are we too quick to judge? Maybe there’s more to the story. Just like Ahad and Sajal’s ‘Yeh Dil Mera’ was criticised and people called out for making office harassment common and not something serious.

Well, we are still waiting for the drama to be on air as only then we will be able to make opinions about it properly.