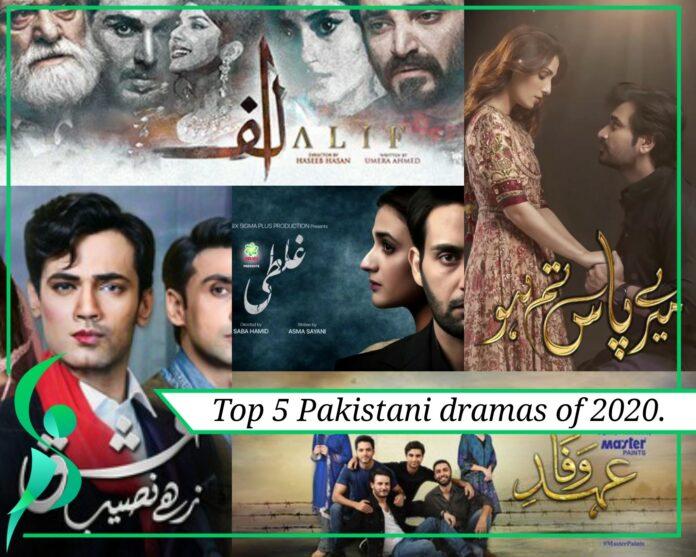 The Pakistani entertainment industry has the gift that keeps people glued to their screens. Wether it be movies, dramas or telefilms, people enjoy Lollywood to the max. So here is our list of the top 5 Pakistani dramas of 2020 that were much loved by the audience.

On top of our list the very well known and most watched “Mere Pass Tum Hou”. The Ayeza Khan and Humayun Saeed starrer showed how Mehwish (Ayeza) acts as a materialistic woman and seperates from her husband for a wealthy business man Shahwar played by Adnan Siddiqui and faces the consequences once Shawar’s wife played by Sawera Nadeem gets to know about the whole ordeal.

Another blockbuster on our list is the Umera Ahmed master piece called “Alif”. It revolved around a rebellious film-maker played by Hamza Ali Abbasi and a struggling actress “Momina” played by Sajal Aly both of whom meet and embark on a journey to find God.

Ehd E Wafa was a multiple actor starrer that focused around the lives of 4 friends who overcome hardships in their lives together and do everything together always. The freinds call themselves the SSG or the Special S Gang as all of them are named with the letter “S”. Osman Khalid Butt, Ahmed Ali Akber, Ahad Raza Meer and Wahaj Ali are the main leads of the series.

Starring Zahid Ahmed and Sonya Hussyn as the main leads, Ishq Zeh E Naseeb revolved aroud Sameer, a guy who suffers from split personality disorder due to childhood trauma and also goes by Sameera when indulged in his other personality. It was definitely an emotional roller coaster ride.

Last but not least on out list is “Ghalati”. With Hira Mani and Affan Waheed as the main leads, Ghalati shows how Saad in anger and frustration divorces his wife Zaira thrice without knowing the consequences and regretting it later on. A perfect binge watch is what it is!

That was it for our favouraite dramas of 2020! Let us know what you loved watching apart from these classics in the comments!