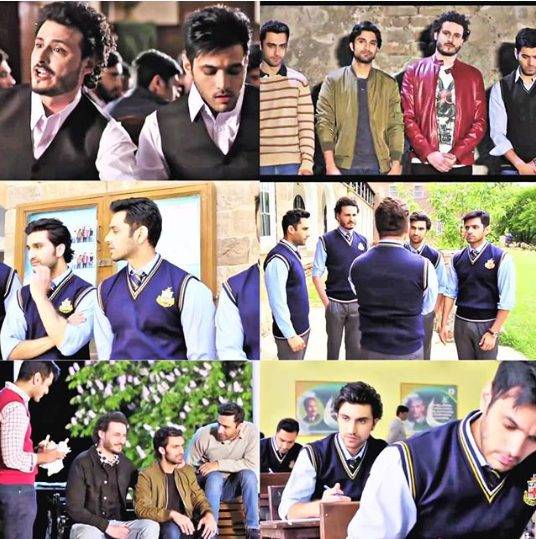 After 90’s PTV heart touching military Dramas “Sunehre Din” and “Alpha Bravo Charlie”, now brace yourself for the new anticipating drama whose name just got revealed, “Ehd-e-Wafa” by Momina Duraid Production and ISPR featuringa Mir, Osman Khalid Butt, Ahmed Ali Akber and Wahaj ali. The stars are playing a role as students of SSG Academy, training to become a commandos but of course how can it be done without struggling.

Rumors had it that there will be a sequel of Alpha Bravo Charlie but we didn’t have the name and also not expecting the teaser that early.

The 1st teaser shows the bromance and adventurous college life.

According to the bio, Ehd-e-Wafa is the “story about true friends on their journey of hardships and hustle, willing to sacrifice for their country.”

2nd teaser shows the Ahad’s love interest in a girl, featuring Alizeh Shah. And his sweetness is too much to handle.

Some BTS are also shared by the stars that are roaming on the social media.

Favorite teaser shared by the ISPR official, displaying the SSG training and the “struggles” and a life without internet.

The show has been shot at the Lawrence College in Murree. Directed by Saife Hassan and penned by Mustafa Afridi of Sang e Mar Mar fame. The release date is not yet revealed but we can say that teasers looks so auspicious and people are hoping that anticipating drama can bring their nostalgia back of 90’s.

What do you guys think about the upcoming drama? Can you wait or not? Can this be that epic and blockbuster like Sunehre din and Alpha Bravo Charlie, let us know in the comments.