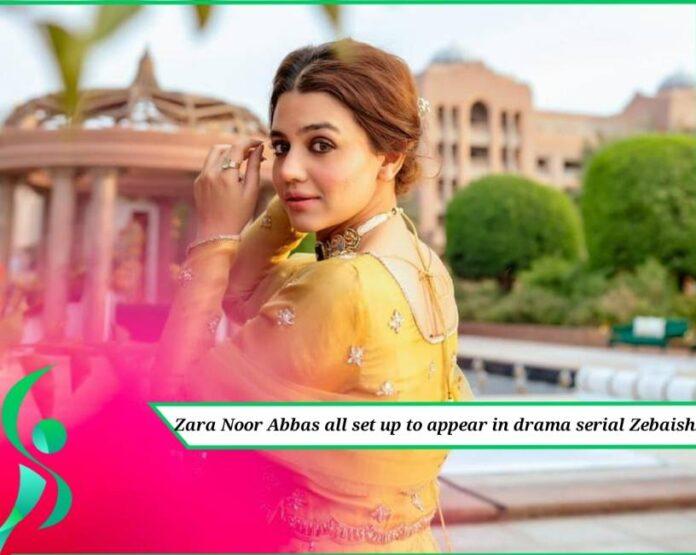 Zara Noor Abbas, daughter of Asma Abbas and niece of Bushra Ansari, who needs no introduction, is considered as one of the most promising actors of the current era. She started her career three years ago when she debuted in Fahim Burneys drama serial “Dharkan” but rose to fame after working in Hum TV drama ” Khamoshi” alongside singer Bilal Khan. Soon after, she married her fellow actor Asad Siddiqui, nephew of superstar Adnan Siddiqui. In 2019, Zara appeared in commercially successful films “Chalawa” and “Parey Hut Love”.
Zara Noor Abbas, The Ehd e Wafa star is quite active on her social media accounts and recently shared the first teaser of her new drama serial “Zebaish”. Talking about her experience in the serial she quoted:
A project close to my heart. It was shot at a very rough time of my life. This serial will always remain exceptionally special to me and it is a treat to my fans for their constant love and support.

Zara Noor Abbas will be sharing screen space beside her husband Asad Siddiqui, who is also excited about this upcoming project. Asad Siddiqui shared the picture, showing gratitude to the team, on and off camera from which he has learned a lot.
“A project to keep in mind with all the celebrated artists and especially the people of the camera. So much to learn during the entire procedure. Lots of prayers to the team”.

Written by the maestro Bushra Ansari, directed by Iqbal Hussain, the airing date of the serial is yet to be revealed. The teaser looks promising, depicting the story of a clash between fame and fortune.