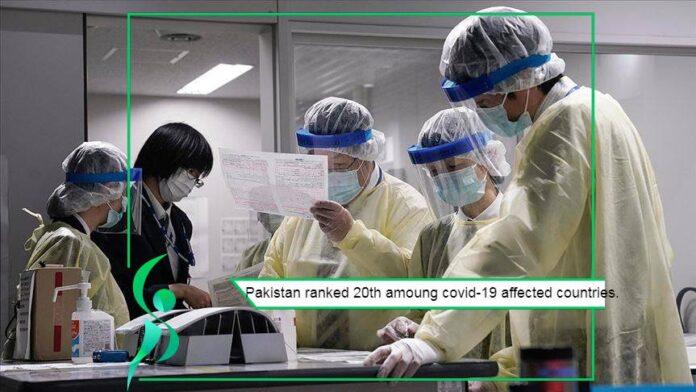 Pakistan climbed to the 20th spot on the global coronavirus ranking on Sunday after the nationwide tally of COVID-19 patients crossed 30,000 after Sindh reported 709 new cases.

According to the coronavirus tracker by John Hopkins University, the country is now ranked 27th with 648 deaths.

Earlier today, the national dashboard in its daily update had stated that 1,991 cases were detected in the country in the last 24 hours taking the national tally to 29,465. This was the biggest single-day jump since February 26 when the first case was reported.

Meanwhile, 267 patients have recovered from the virus, taking the total number of recoveries in the country to 8,023.

UN Secretary-General, Antonio Guterres has called for global action against hate speech that has risen alongside pandemic. Listing examples of hate speech that surfaced during the crisis, he stressed the need to end anti-foreigner sentiments, conspiracy theories, and attacks against Muslims on the pretext of the pandemic.

YouTube will give Pakistan $5 million in advertisement grants to spread awareness about the coronavirus.

Pakistan is heading toward a coronavirus emergency, yet the response of PM Khan’s government has so far been unsatisfactory. Experts say the country could face a huge catastrophe if the authorities don’t act properly.

Experts say the coronavirus cases in Pakistan are steadily increasing, yet the authorities and the common people seem to be taking the issue lightly.

Pakistani Prime Minister Imran Khan’s televised address to the nation on Tuesday was a proof of an apparent complacency, analysts say. Khan said the cases were likely to increase further but there was no need to panic. He also refused to impose a partial lockdown in major cities to contain the spread of the novel coronavirus, officially called the SARS-COV-2.

“If we shut down the cities – people are already facing difficult circumstances – we will save them from corona at one end, but they will die from hunger on another side,” Khan said.