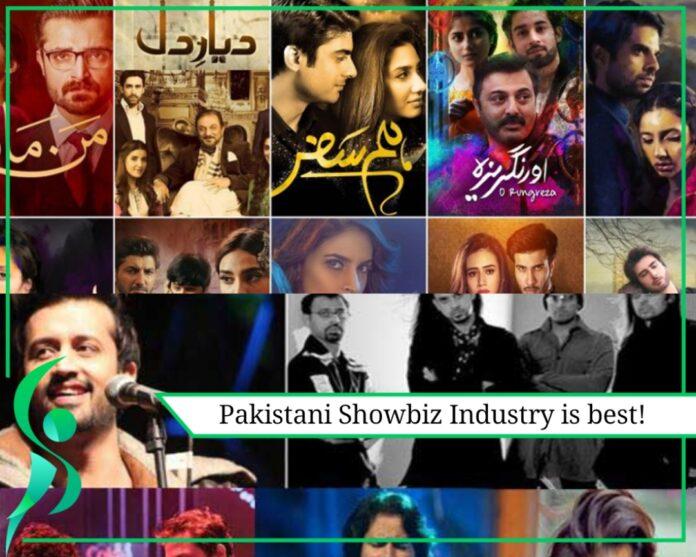 We have listed top rated dramas,movies and music of Pakistan which were biggest hits of our industry.

The drama industry is known to produce some amazing scripts blessed with most talented actors. They are capable of bringing a character to life and to be able to relate to the audiences. The viewership of Pakistani dramas is not only in Pakistan but also abroad. The actors have received immense love from all over the globe which proved the success of our drama industry.

The biggest hit of 2019, Meray pass tum ho broke all the records TRP’s and viewership and became the most followed drama of the year. The lead cast includes most renown actors like Ayeza Khan, Humayun Saeed and Adnan Siddiqui.

The drama aired on ARY digital and was even followed by overseas Pakistani’s. The story-line and Ost of drama were popular among all age groups. The drama even trended on every social media platforms and Ost was sung by Rahet Fateh Ali Khan. The episodes of this drama trended on YouTube as well.

Ehd-e-Wafa was telecast on Hum Tv created by ISPR and produced by Momina Duraid, the story-line was a fresh breath of air for youngsters as they were able to relate to a group of four friends and to their struggles in life. The lead cast of Ehd-e-Wafa had some great talented actors of our industry like Ahad Raza Mir, Alizeh Shah, Osman Khalid Butt, Ahmed Ali Akbar, and Wahaj Ali. The last episode of Ehd-e-Wafa trended for days on YouTube and social media.

Khaani became the blockbuster drama of Geo tv in no time, the drama aired in 2017. Feroze Khan and Sana Javed starring drama was loved by people due to its strong storyline highlighting the sensitive topic of society and even delivered a powerful message to the audience.

Khaani was a biggest success as the drama streamed on Netflix,trended on YouTube and was followed by masses.

The Pakistani movie industry has evolved rapidly over a period of time and has seen some powerful movies which shake everyone to the core. There some great Pakistani movies releasing in upcoming years you should really look forward to.

Bol highlighted sensitive but a very important topic of our society, Shoaib Mansoor director and producer beautifully crafted the storyline. The film was part of a maternal and child health project, and revolve around the health issues of child and mother. The lead actors worked in this film were Humaima Malik, Mahira Khan, and Atif Aslam. Atif Aslam sang songs for this movie which are still quite a poplar among his fans to date.

Yet another commercial film Punjab Nahi Jaungi starring Humayun Saeed, Mehwish Hayat, and Urwa Hocane was a big hit of 2017. The story was based on a love triangle between the lead actors under the banner of ARY Films, with the gross profit of Rs 516 million. Also, the movie highlighted the culture of Punjab, and the music of the film was loved by the audiences.

Laal Kabootar Pakistani action crime film released in 2019, lead actors were Mansha Pasha and Ahmed Ali Akbar, the film premiered on Geo Tv in August 2019. The film also got selected for oscars too and wins Best Feature award at TSAFF 2019.

Pakistan is full of talented people which can be see in our industry in terms of music, drama or films.

Comment your thoughts below and let us what you love about the industry!