Home Celebrities 7 Pakistani Celebrity Couples who got Divorced Recently and Major Reasons Behind... 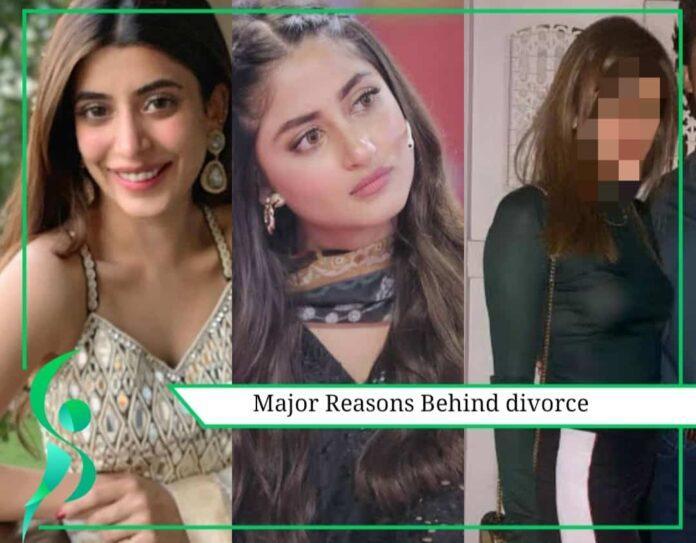 Some Pakistani celebrities who are famous as couples, get separated even before marriage like Hania Amir and Asim Azhar. That’s not divorce as they were not married.

Divorce isn’t an issue to be highlighted, but fans are fond of keeping an eye on their favorite showbiz celebrities, their social media posts, and pictures. They notice their marital relationship too and so, celebrities announce their divorce publicly, which is heart-rendering for their fan following.

Both celebrities married on 21 October 2012 and were blessed with a beautiful daughter in 2014. They got separated on Feb 29, 2020, after 7 beautiful years of marriage.

The reason behind divorce: Many rumors spread like rapid fire in the forest that Shahroz was into Sadaf Kanwal, that’s why he cheated on his wife. But later on, he denied all these rumors saying that he is answerable to Allah and his daughter when she grows up and asks her father about this. Shahroz said that Sadaf was a colleague to him until he got separated from his wife. Syra was silent regarding this whole situation.

Mohsin and Fatima were married in 2015. They were blessed with a beautiful baby girl who couldn’t survive more than 7 weeks. Then they gave birth to a beautiful baby boy named Haider Abbas Mohsin. This celebrity couple got divorced in 2019.

Sanam and Abdullah were colleagues when they married on 12 October 2013. Their life didn’t go as they expected and the audience had to witness their divorce in April 2018.

The reason behind divorce: Sanam didn’t point out any reason for their separation, but told in an interview that they were best friends before they got married and they think that they can continue to live happily as friends, not as a couple. Abdullah Farhatullah didn’t talk about divorce openly but says that he is happy to live a single life now.

Sanam Saeed is a known Pakistani actress due to her mesmerizing looks and amazing acting skills. She married her best friend, Farhan Hassan, on 2 January 2015. Their marriage didn’t run smoothly and they got separated in 2018.

The reason behind divorce: Sanam preferred to keep her personal matters private but in a show, she told the cause of divorce. She said that her mother fell seriously ill after her marriage. She couldn’t love Farhan the way he deserved so she decided to focus on her mother’s health first. Moreover, she said that she wasn’t ready for the responsibilities of marriage. She tried to fulfill her obligations but it was hard for her. We have no statement from Farhan Hassan regarding divorce as he is not a celebrity.

Sara and Mikaal were happily married on 2 April 2010 and were blessed with two daughters. They were a favorite and a cute couple of their time, loved by people. In March 2017, after 5 years of their marriage, they were legally divorced.

The reason behind divorce: Mikaal and Sara didn’t talk much about their divorce and its cause. Mikaal was asked about the cause of divorce 4 years after it and he didn’t blame Sara and said that they weren’t meant to be together. Sara is a strong lady, raising her two daughters alone. She hinted about being responsible for her daughters emotionally and financially even before the divorce. So it’s not difficult for her. It was the underlying reason behind their divorce.

Mahira Khan started her career and rocked in the field of acting. She married Ali Askari on 13 July 2007 against her father’s opinion. They have a son named Azlan but got divorced in 2015 after eight years of being married.

The reason behind divorce: Ali was always seen less on screen and after their divorce, he was hardly even noticed to give any statement. Mahira also avoided talking about her private life publicly but she used to quote the support she had from her in-laws and husband regarding her career and taking care of her lovely son. Nobody knows the cause of their divorce, a marriage isn’t always supposed to work out even if you are a celebrity. They respect each other after separation is something to be appreciated.

Humaima Malick got divorced in 2012 after one year of marriage.

The reason behind divorce: Shamoon blamed Humaima that she wasn’t interested in keeping a happy marital relationship and she didn’t value his time or presence. Moreover, he said that Humaimas priority was her career, not her husband. Humaima, on the other hand, said that she was young at the time of marriage and her husband wasn’t understanding and he gave her a lot of pain.

Sajal and Ahad were married on 14 March 2020. They are people’s favorite for the amazing bond they share. But to the surprise, Sajal removed Ahads name from her official Instagram account, and Ahad and his family didn’t attend Saboors wedding. Since then, there are rumors around about their divorce but they haven’t made a legal statement or step. So it’s better not to accuse anyone of it yet until they announce it officially and give a reason. We hope they keep this beautiful relationship going.

Urwa and Farhan have been happily married since 16 December 2016. They are one of the most loved couples by the people. There was a rumor in 2021 that they are getting divorced which left their fans heartbroken, though it was only a false news. Some people think it was merely a publicity stunt.