Home Celebrities Adnan Siddiqui calls out Amir Liaquat over his insensitive statements on the... 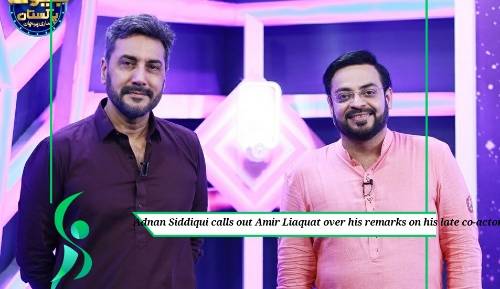 The versatile actor and performer Adnan Siddiqui lashes out on Amir Liaquat for his inappropriate marks on the death of Sridevi and Irrfan Khan.
Adnan Siddiqui was recently seen in Amir Liaquat’s Ramzan transmission named “Jeevay Pakistan” where the host passes some derogatory comments on the passing away of veteran Bollywood actor Sridevi and versatile Irrfan Khan. The ill-fated decease of these artists came as a blow to their followers and family who are still dealing with it. During an exchange of words with the actor, he specified that both of these entertainers had one thing in mutual which was acting with Adnan Siddiqui. He went ahead to add that the reason Bipasha Basu and Rani Mukerjee are alive is because of the reason that Adnan turned down the proposals performing opposite to them.

The insensitive comments of Amir Liaquat went viral in minutes and people took their social media handles to condemn his remarks over their much loved Bollywood stars.
Meanwhile, the Mere Pass Tum Ho actor took his Instagram account to express his disappointment on host inconsiderate remarks and disapprove of his actions.
“The anchor-person Amir Liaquat joked about something extremely delicate. Not only were they both near to me but as a human, it is immoral on so many levels.”
He termed the act insensible and announced an appeal for forgiveness from the nearest and dearest of the demise actors.
“It was an extremely unsympathetic act to pun about the departed lives. This is in very bad taste, not only does it display him and me but also the whole nation in a bad light.”
“I want to apologize to the family of Sridevi and Irfan Khan and their relatives.”

A few moments later, when the criticism initiated and Hussain was forced to deliver an excuse by saying that his comments are taken in the wrong way. He cited, “At times you can get carried away with what you’re saying on an on the air. Hope we all can get over with this now”.