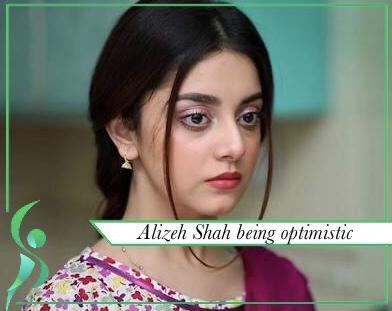 Alizeh Shah is a Pakistani television actress. Her performance as Palwasha in Ishq Tamasha earned her Hum Award for Best Television Sensation.Alizeh Shah has played the role of Dua in Ehd-e-Wafa. She has played lead role in Hoor Pari, Jo Tu Chahey and Mera Dil Mera Dushman.

Her innocent face and the beautiful looks impressed people in the first glance and no doubt, she is doing great in all of her dramas.
News surfaced little time before that Nida Yasir, Yasir Nawaz and the entire cast of drama serial Mera Dil Mera Dushman has contracted coronavirus, however, no official statement was made in this regard apart from Nida Yasir’s family. But one thing has been confirmed through Alizeh Shah’s Instagram post that she is in isolation. She is taking that time a blessing for her because of her optimistic approach towards it

She expressed her feelings by saying this:

“Alhamdulillah I have had the privilege to have lots of time lately to think and reflect on how many things we take for granted, obviously, not everyone has everything but everyone has something or another, from smaller things like the air we breathe in, water, food, a roof above our heads, the kindness strangers show, the smiles on peoples’ faces when they accidentally look at someone, to bigger things like health, family, friends, the love and care we receive from them”,
“This life which we were given and the world we’re living in is beautiful and I hope that we keep it that way. Given the status quo of this pandemic, we’re all going through maybe one of the toughest times of all time but I believe we’re ashraful makhluqat and inshaAllah we will overcome this as well”, she further added

Alizeh concluded her post with prayers, saying, “My prayers are with everyone who lost their lives due to covid19 and the tragic plane crash took place, prayers for their family & relatives Allah unhe sabr de Ameen!”.