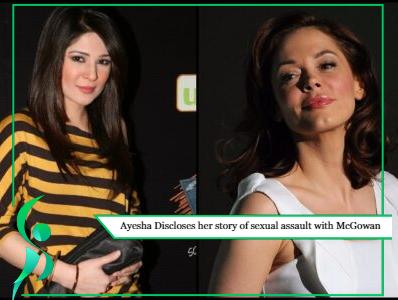 Ayesha Omar is one of the most famous and iconic actresses of the Pakistani industry. She is considered as the leading fashion Diva. During the Instagram Live chat session with McGowan on different subjects which is associated with sexual harassment in the Pakistan Showbiz industry, she reveals her experience of sexual assault. She concluded her story that she was being harassed and raped by a dominant man. He seems to be twice the age of Ayesha. Though, she persists the silence of this man’s evil act for about 15 years.

Ayesha Omar speaks up on the #MeToo movement.

She briefly concluded her story:

She further added that:

In the Instagram live session with director McGowan, Ayesha said that how the social media criticize whoever shares their stories with the #MeToo movement.

Ayesha Omar further said that when one of her companions from the showbiz industry came out with her story, TV channels began calling Ayesha to ask: ‘Do you believe she’s coming up honesty?’ “And she said ‘I would accept any sexual assault survivor’. They inquired more about sexual harassment acts and that was the first-ever instant when I said ‘yes’. She said that “I will discuss it sometime in the future, yet not today”. I despise everything haven’t named my beast yet I’ve begun discussing it,” Ayesha added up.

Stay Tuned with Showbiz Pakistan for latest news and updates.