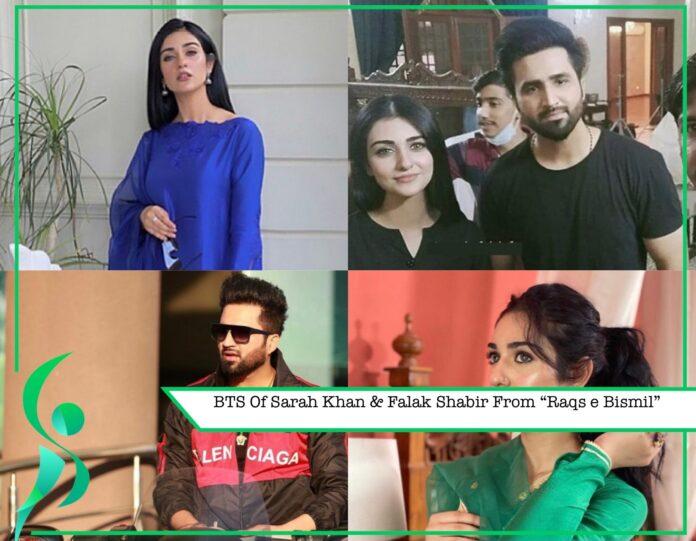 After announcing their togetherness, people love their pictures, videos, and chemistry. And one of their videos go viral on the internet, which was adored by everyone, and we think everyone must have re-watched it multiple times. In which no doubt Sarah Khan and her husband Falak Shabir both were looking immensely happy and beautiful.

Well, if you are a Sarah Khan’s fan and enjoys watching her, here is a piece of good news for you guys. The newly married duo Sarah Khan and Falak Shabir are all set to hit the screens for a drama serial called “Raqs-e-Bismil.” Which means we will get to see them more together. It will be a debut of Falak Shabir as an actor, and we are excited.

Here are some of the pictures of BTS of Sarah Khan and Falak Shabr from their upcoming new project.

We are totally loving this green outfit of hers and the curly pony tail as well.

Blue is never out of fashion and Sarah Khan is totally prooving in this behind the scenes picture.

Again the classic picture in the green outfit and we couldn’t stop our self from posting again!

In this selfie you will find the newly wedded couple together from the sets.

Orange is new black and we can see that on Sarah Khan.

We hope you guys enjoyed all these BTS of Sarah Khan and Falak Shabir pictures.