Home Drama Most Popular Drama Serials Of PTV Of All Time 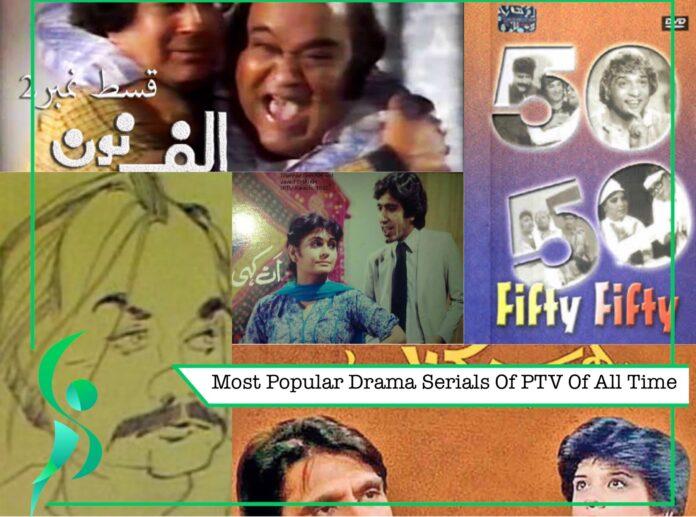 PTV is embedded in our hearts no matter how many different channels come in Pakistan none f them can ever replace PTV. Some of the drama serials of PTV are so popular and ever-green that no one can ever forget them. PTV is a memorable and legendary channel because the artists who worked in the channel have worked in it whole heatedly and were so compassionate to their roles. So, guys today we will be re-mincing some of the most popular drama serials of PTV. We guess it will be a major throwback for most of you.

There are so many best popular drama serials of PTV and choosing five among them would be real hard for us. But according to the line base and story our choice would be:

Dhoop Kinare was one of the best PTV drama serials ever. The acting is done in this serial by Rahat Kazmi, and Marina Khan was simply outstanding. It was the show to binge-watch for the people of old times. The story of this drama serial used to revolve around the lives of the doctor in the hospital. The story was not just based on the doctors’ role in the hospitals only but also in their private homes as well.

Alif noon was comedy-drama serial which was aired in 1962, and the show truly made sure to laugh their audience to the fullest. Alif Noon was all about the guy named “Allan” who used to get into every tricks and technique to earn money, and he always used to think about the money. Not just that he was famous as a businessman as well his appearance in the serial is quite funny as well as it represents the mixture of funny, dumb, and unique as well.

Fifty fifty was the best Pakistani drama serial to be aired in Pakistan in its time. The genre of Fifty-fifty was comedy and parody of others. This serial made sure to laugh the audience till their stomach aches. The acting of Ismail Tara, Zeba Sehnaz, and Majid Jehangir is remarkable.

Angan there is one of the just amazing drama serials of PTV and which should be re-called as the blockbuster of its time. The story of this drama is based on the servant of a husband and wife; the servant himself was a musical dancer in his times. In between the serial, there comes so many twists and turns through the servant that made this show addictive.

Ankhai is that drama of PTV that motivates every girl in the best way possible. This drama was based on a girl who dreams of being well off in terms of money and relation as she lost her father at a very early age. Her dreams were not limited to the money but also how t be a successful person for her family, who has lost almost everything due to the death of his father. Ankahi has to be our personal favorite as the story line of this drama serial is just amazing.

These were some of our personal favorite drama serials which we will remember forever. Which one is your favorite aomongst the one listed above?