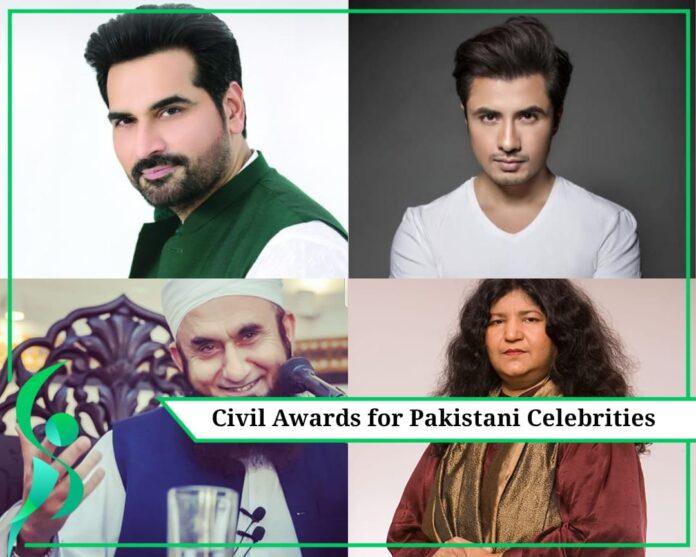 On the occasion of 73rd Independence Day, the government of Pakistan has announced civil awards for Pakistani celebrities which makes a total of 184 Pakistani’s and foreigners included for their services to the country in their respective fields. Civil awards for Pakistani celebrities will be presented by President of Pakistan Arif Alvi in a ceremony scheduled on Pakistan Day (23rd March 2021). Celebrities of Pakistan have shown excellence in their respective fields for making the nation proud by offering their services and portraying a positive image of Pakistan worldwide.

Civil awards for Pakistani celebrities comprise renowned actress Bushra Ansari and Talat Hussain a Pakistani journalist who will be receiving Sitara-i-Imtiaz among others. Both of them have entertained audiences through their work within Pakistan as well as outside the country. Whereas Pride of Performance accolade will be given to actors Humayun Saeed and Sakina Samoo, followed by Ali Zafar (singer) and religious scholar Maulana Tariq Jameel. News Achor Naeem Bukhari is also among the recipients for his dedicated hard work for the betterment of the country’s image in the world. Civil awards for Pakistani celebrities are given as recognition to people who have earned goodwill to the country and showing excellence in their fields.

Pakistan’s prestigious award , Nishan-i-Imtiaz will be given to singer Abida Parveen and poet Ahmed Faraz. Head of Edhi Foundation, Faisal Edhi son of Abdul Sattar Edhi will also be awarded Tamgah-e-Imtiaz for serving humanity irrespective of caste, color, or religion. Nishan-i-Pakistan country’s highest civil award will be received by Kashmiri leader Syed Ali Geelani in recognition of his decades-long struggle for Kashmiri’s right to self-determination which will be received by a Hurriyat leader from the President of Pakistan in the ceremony to be held in Aiwan-e Saddar.

Last year civil awards for Pakistani celebrities were received by: