Home Extraaa Masala What If Ertugrul Was Made In Pakistan? 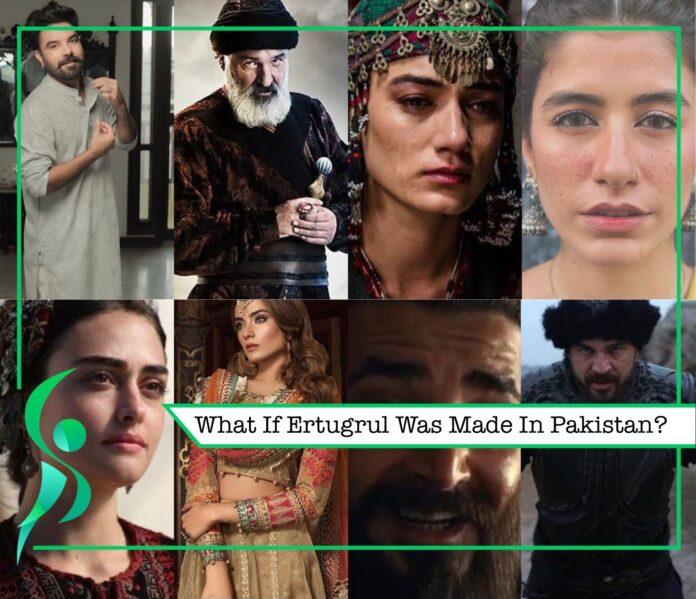 Ertugrul wave in Pakistan is effective that there is no Pakistani out there that can’t help to not think about the show. There are always hater and lovers at the same ratio if something is trending but with Ertugrul the weight-age of love is more than hate. The one who watches Ertugrul religiously can’t resist themselves from adoring the characters of the famous show.

Now what made us thoughtful about this show is What If Ertugrul was made in Pakistan? And which Pakistani actor or actress could play the role of the famous cast members.

If you are one of the few Pakistani who hasn’t watched the famous and most hyped show of 2020 then, here is the trailer:

Disclaimer: We know that not every character is not alike the one we think of. We are matching the personality of the Ertugrul Ghazi Characters with our Pakistani Actors as well its just not about the physical features. Your point of view can be different and we totally respect that.

What If Ertugrul Was Made In Pakistan?
hide

Ertugrul Ghazi is the main and lead role, playing the role would be a challenge for anyone as the acting is done so tremendously by the Turkish actors. According to us, Hamza Ali Abbasi would be a perfect match of the Ertugrul as he has just played a role sort of alike of Ertugrul in his new upcoming movie which shall be released anytime soon called “Maula Jatt.” We do find the resemblance of both the characters because of the beard, a little features, and most importantly the aggressive expressions.

Halima Sultan which is the lead femaled charactr would also be a challenge and we think that this role will suit alyzeh gabol, Pakistan’s famous model, well as she seems a little bit poised an gentle just like Halima Sultan. We think alyzeh gabol would carry this character gracefully.

Seljaan is the true player of the show and her role makes the show 100 times more exciting. We are not denying the fact that how beautiful she is but her beauty and personality reminds us of Zara Noor Abbas. According to us Zara fits perfectly for this role.

Suleman Shah is the heart of the show and the way he delivered his dialogues made all of us his fan. And way of conveyance and his look somewhat remind us of Muhammad Ahmed which is our senior Pakistani actor.

Hayma Khatoon is there in the show to give you all the vintage vibes and her scenes will surely make you go in the history. So, according to us Simi Raheal will be the perfect match for the role of Hayma Khatoon. Also, don’t deny how much resemblance they both have.

Ikiz is the sweetheart of the show and so is Syra Yousuf of our industry. Ikiz is the epitome of beauty and looks gorgeous for whatever she does because of her innocence and thinking of anyone alike Ikiz made us think about Syra Yousuf. As both of them are immensely gorgeous and we think that Syra Yousuf will do this role better than anyone else.

These are the Pakistani celebrities that we think will be the Pakistani version of Ertugrul Ghazi’s cast. What do you guys think about this one? Which character you find the same exact and which one you think should be replaced? Do tell us your opinions in the comments section.