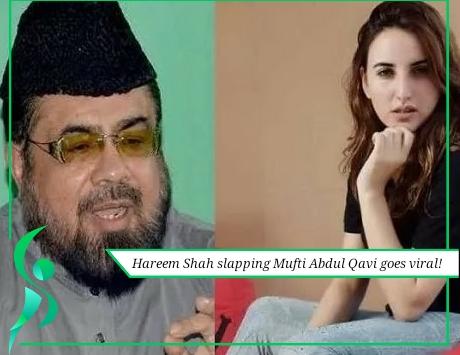 Hareem Shah slapping Mufti Abdul Qavi is making rounds on social media and everyone wants to know the reason why! Both of them have been telling different stories on social media regarding what actually went down that triggered Hareem to slap the religious cleric! Keep reading to learn more.

Why is Hareem Shah slapping Mufti Abdul Qavi in this viral video??

A video went viral on the internet that showed a woman clad in a red dress slapping the religious cleric Mufti Abdul Qavi. People had their doubts about who the woman was until one came forward claiming it was her!

Hareem Shah, the woman who rose to fame through her TikTok videos made it very clear later on that she was the one who slapped Abdul Qavi in this video making rounds on the wide web. But what was the reason that caused Hareem to respond so aggresively?

While in conversation with Kiran Naz from SAMAA TV, Hareem said that the reason she smacked the cleric across his face was that he:”He spoke salaciously and we have recorded the whole conversation.” Apparantly, Qavi had been trying to initiate a “vulgar” conversation with Hareem and she did not like it. Hareem slapped the religious cleric while her friend recorded the ordeal.

She told GEO NEWS that Qavi had been invited to Karachi for a program shoot and she had been bearing all his expenses including his accommodation. When Qavi was questioned about Hareem Shah slapping Mufti Abdul Qavi, he told the media that he had no idea why Hareem slapped him, he was sitting in his room peacefully and Hareem slapped him out of nowhere!

Hareem also added that: “I have no regrets, if people life Qavi were properly punished, no rapes would take place in Pakistan.”

Qavi has also previously been accused of being involved in Qandeel Baloch’s murder by her brother.

This is it for Hareem Shah slapping Mufti Abdul Qavi goes viral! Keep visiting our website for more content.