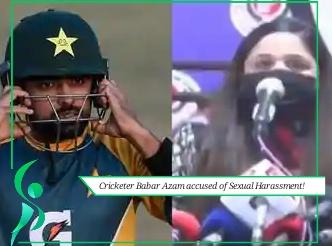 Another day another drama! Cricketer Babar Azam accused of sexual harassment by a lady named Hamiza in Lahore. The lady claims that all this took place in 2010 when they were schoolmates and were deeply in love with each other. Keep reading to learn more about this situation!

The skipper was accused by the lady of sexually harassing her and exploiting her for money when Azam was not a known cricketer. She claimed that they were young lovers and went to the same school and even lived in the same neighborhood.

She claims that when both of their families rejected the couple, Babar bought her apartments to live at just so they could be together! She further added that when the two were not able to survive together in the end, Babar physically abused her a lot in the year 2017.

“I supported him financially when he was  struggling before he became famous. I spent millions of rupees on him.” The lady went on adding to her claim. She even said that she tried to lodge an official complaint to PCB but was told off saying it was a personal matter between them both.

Watch the whole press conference below!

This is it for Babar Azam accused of sexual harassment! Keep visiting our website for more Lollywood content.