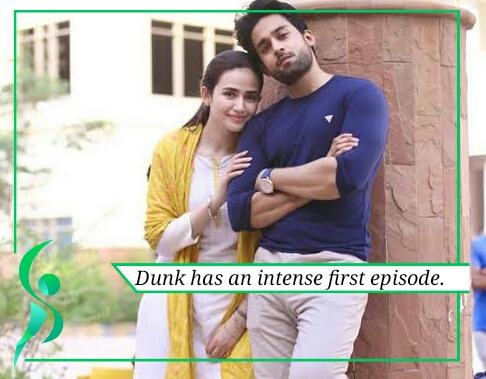 One of the most awaited drama serials of the entertainment industry “Dunk” is finally here and it has the traits of a hit drama. The drama created a following after its intense and bold trailer releases and was the talk of the town after its first episode was released.
The drama features Bilal Abbas, Sana Javed, and Nauman Ejaz in lead roles who are playing the character of Haider and Amal.

It is produced by Fahad Mustafa and Dr. Ali Kazmi. The director of the drama serial is Badar Mehmood.
Dunk is centered around the #MeToo movement and it is a story of harassment faced by a student in her university by a senior professor.

The first episode was an intense ride as it opened to students gathered around raising their voice and boycotting classes to protest against the harassment case of Amal and professor Humayun.

Nauman Ejaz is one of the finest actors in the entertainment industry who depicts a strong character in the drama while all the characters support the drama.

What do you think about it
For more news and trends, follow.