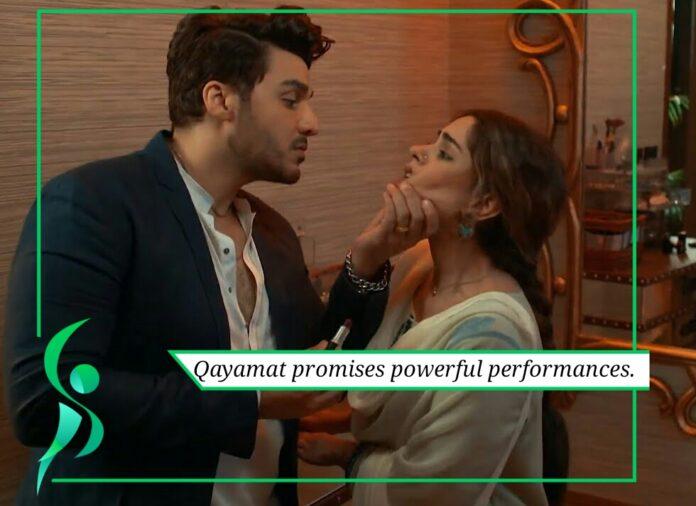 “Qayamat” is a collaboration of 7th Sky Entertainment and is penned by Sarwat Nazir and is under the direction of Ali Faizan.

The resilience of the entertainment industry is remarkable since it is still functioning after a global pandemic that brought the whole economy to a halt. Leading the list of new dramas is “Qayamat”.

Qayamat and its cast.

Featuring an ensemble of Ahsan Khan, Amar Khan, Neelam Muneer, and Haroon Shahid in lead roles. The teaser depicts that the audience is in for a surprise and powerful performances by the actors.
The teasers provided a sneak peek at the characters played by Ahsan, Amar, Neelam, and Haroo

Ahsan Khan appears to have a negative role as he is portraying a self-centered man. He appears as a man who smokes and drinks while also abusing his wife.

Amar Khan is playing the wife of Ahsan Khan’s character while Neelam and Haroon portray each other’s love interests.

Well, there is a twist in the story when it is revealed that Neelam gets married to Ahsan Khan’s character in the show.

Ahsan Khan is revered for portraying “Imtiaz” on the hit drama serial “Udaari” in which he gave a stellar performance. It is thrilling to see Ahsan portray these roles with such sophistication.

Sana, Shabbir Jan, and Saba Faisal provide a strong supporting cast and it is expected that Qayamat has memorable performances for the audience.