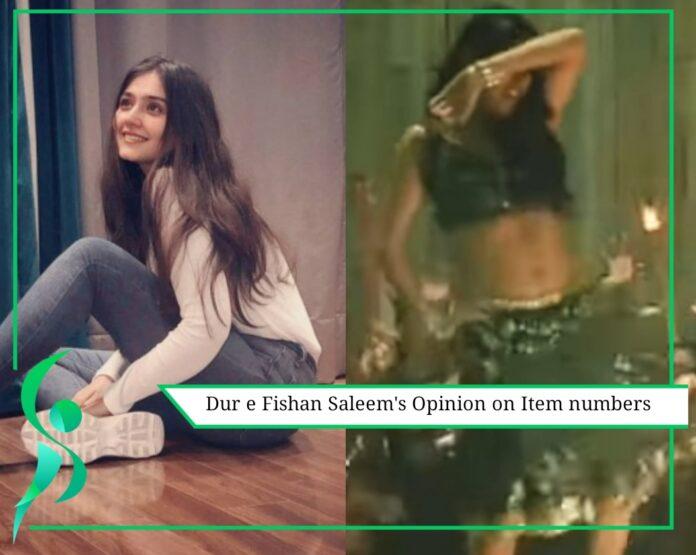 Dur E Fishan Saleem is a new glimmering face of the Pakistani Entertainment industry. She is an actress and a model and has been the lead actress of several recent Pakistani hit serials like Pardes, Dil Rubia, etc. This 26-year-old actress has an immense international fanbase and is gaining more and more fame every day. Recently, in an interview, a statement regarding Dur E Fishan Saleem’s item numbers took a huge toll in getting all the limelight towards her.

The Pakistani Television Drama actress said that she is not interested in doing any item numbers, or playing any certain characters that objectify and demean women at large. Thus new-generation Pakistani actress is all about breaking the pre-existing norms and reforming the face of Pakistani Television.

Dur E Fishan Saleem’s Item numbers speech was recently telecasted in a Pakistani talk show, of which she was a part. It was The Mazedaar Show that aired on TV One, hosted by Faizan Sheikh and Adeel Amjad, aka, Aadi.

In the show, she was asked about the types of roles she doesn’t want to do now or in the future. To that, the actress replied that she would not be participating in any item number or anything that objectifies women and their bodies. She mentions that she is extremely reserved about her attire, and anything that suggests she cross the borders of her dress code will be denied by her.

Due E Fishan Saleem’s item numbers statement makes the point about how modest and well respected she is when it comes to her clothing and her career choices.

Apart from that, the actress belongs to a well-reputed family. She is the daughter of Saleem Ul Hassan, a former TV drama director, and producer of PTV. Despite being brought up in the entertainment world, Dur E Fishan Saleem’s Item numbers statement reflects on her positive upbringing and integrity. She is the eldest daughter among four siblings. She belongs to a well-educated family. Her younger brother Abdullah is an architect and Fishman herself for her LLB Degree from the University of London.

In light of her showbiz career, she started her journey with a popular drama serial Dil Ruba, where she played the role of the elder sister of Sanam, Irum. Her amazing performance in the role made her a shining star, which followed a series of offers from numerous other shows.

She appeared in Bharat, opposite Omer Shehzad, and fans loved and appreciated her performance.

Currently, she is the leading actress of the drama serial Pardes, opposite Affan Waheed. Her performance has a wide fanbase. The actress also has a dominant social media presence with over two hundred thousand followers.

Lining her recent successes, the actress has a long way to go in the entertainment industry in Pakistan and abroad. A lot of people including highly paid producers and directors have been impressed by Dur E Fishan Saleem’s item numbers views, and she has received many potential offers for her talent, outgoing, friendly, and bold personality, and apart from that, her innocent, mesmerizing looks. She has a prosperous future in the Pakistani entertainment industry.