Home Celebrities Famous Pakistani celebrities who got married in 2019 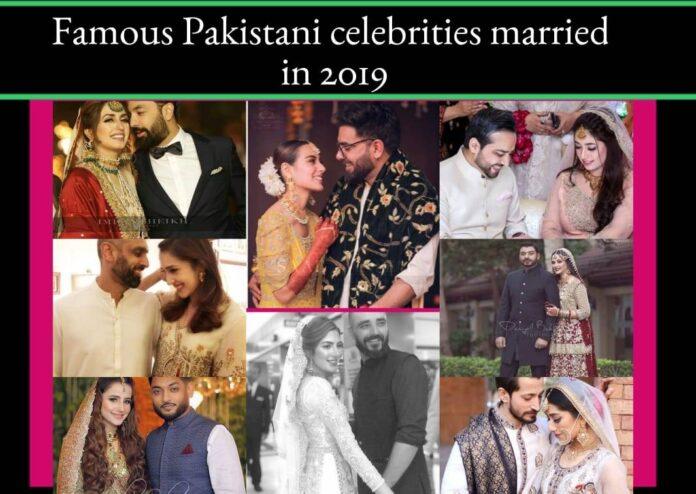 Marriage is the name of togetherness, festivity and memories filled with joy and happiness. Every year comes with this blessing that many people tie knots and live happily ever after likewise 2019 has been the year full of beginning of new chapters for many celebrities of Pakistan.

Celebrities who tied knots in 2019 are:

The most favorite and beautiful couple of Pakistan Hamza and Naimal got married in simple and traditional way on August, 25th 2019 at Monal, Islamabad and attended by their relatives and friends.

Super model and actress Imaan Aly tied knot with Babar Butt on 21st February 2019. . Their marriage ceremony was attended by many celebrities and it was held in Lahore.

Glamorous Pakistani actress Saniya Shamshad got married with Hidayat Shah and looked absolutely stunning in each and every event of her marriage.

Famous Pakistani actress Naheed Shabbir married with Nomi Khan in September 2019. She looked so beautiful on her big day.

The daughter of journalists Najam Sethi and Jugnu Mohsin “Mira Sethi” who is a famous actor and writer of Pakistan tied knot with her childhood friend Bilal Siddiqi on November 14th 2019 in Lahore. The couple looked so adorable on their big day.

The son of popular actress Saba Faisal, Salman Faisal got hitched with Neha Malik in Feburary 2019. The couple looked so alluring in their wedding pictures.

Most popular Pakistani producer and the maker of film “Siyaah” Imran Raza Kazmi got hitched with Saadia in November 2019 .