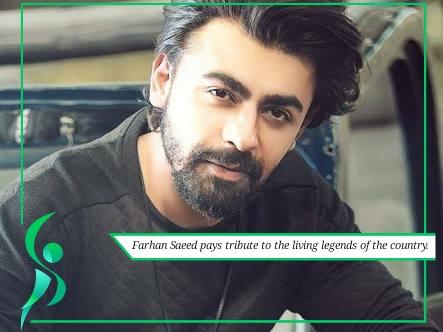 The accomplished singer and actor Farhan Saeed pays tribute to living legends of Pakistan who have inspired our lives in many ways.

The year 2020 has turned our lives upside down, we have lost some of the celebrated figures in the world of sports, music, fashion, arts, literature, etc. As the year has been devastating, the singer Farhan Saeed decided to offer homage to living legends of the country.

The singer aims to pay tribute to living legends of the country who we love, admire, and aspire to become. The actor took social media to share his vision and requested his fans to offer support in his effort.

Firstly, he paid tribute to the veteran actor Qavi Khan, with who he is sharing screen space in his upcoming feature named Prem Gali. The 87-year-old actor is offering his services since 1964 and Farhan recently got to work with him.

“Anyone who has worked with Qavi Sahab would know his demeanor only commands the utmost respect. He is an institution. For his exemplary body of work he has recently been decorated with a Pride of Performance by the Government of Pakistan”.

“He motivates younger actors by encouraging them to push the bar with each performance. To encourage us, Qavi Sahab always tells us, we are better at what we do than his generation was. His wealth of experience is a guide book for those who have only just recently joined the industry… In Qavi Sahab’s own words: ‘Neeyat ki sachai or Mohabbat may khaloos he Mohabbat ka sadqa hai’,” he quoted.

The next on his list was the acclaimed singer, Abida Parveen. The Queen of Sufi music needs no introduction, who is celebrated across the border too.

“Her soul-stirring voice and melodies have long had listeners across the globe in absolute awe. As a person, Abida Ji embodies the very essence of Sufism. The few times I have had a chance to meet with her, I have witnessed her absolute humility and respect for others. Be it another musician or a fan, everyone and anyone are extended the same warmth and courtesy by her,”.

“Abida Ji is undoubtedly a source of pride and inspiration for every Pakistani. Her ever-willingness to learn and teach others is incredible and a lesson for us all. She has paved the way for generations to come and pursue their journey. I too take inspiration from her unmatched passion – her work has always been a major source of inspiration and motivation for me,” he said.

Well, we all agree with her words.

Farhan Saeed has also asked his followers and fans to start the chain of tribute for the living legends of the country which will be highlighted in his stories.

It has been two since he started his post and more will follow. The effort of the singer is commendable and we often neglect our stars when they are alive.

Farhan Saeed will soon be appearing in Prem Gali on Ary Digital beside the beautiful, Sohai Ali Abro.

From the desk of Showbiz Pakistan, we thank Farhan Saeed for initiating the trend and wish the best of luck for his work.