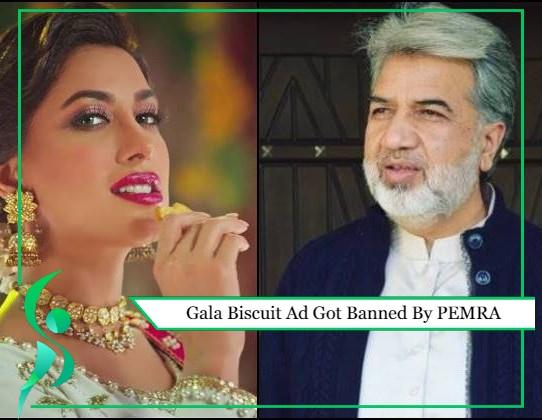 PEMRA took action against the content Gala Biscuit Ad. Recently, we have witnessed that the Pakistan Electronic Media Regulatory Authority short for PEMRA has already warned the TV channels regarding nonethical and vulgar content. As presently, two drama serials Ishiqiya and Jalan were suppressed by PEMRA due to its indecent content. Now, The Pakistan Electronic Media Regulatory Authority (PEMRA) has banned Gala Biscuit Advertisement. As the content Ad becomes the new controversial and hot topic against the company itself as well as for Mehwish Hayat.

Why Gala Biscuit Ad Got Suppressed by PEMRA?

Mehwish Hayat is one of the most popular and iconic actresses of the Pakistan showbiz industry. Lately, the actor has amazed all of us with her back to back remarkable performances. And she has been updating her with her new upcoming project and it turns out to be her advertisement for Gala biscuit.

The commercial was released on October 4, 2020. The order from the regulatory body was immediately being announced after the Gala biscuit Ad gets on streaming on National Television. And right after its airing, the audience including other representative people who took this to the internet urge the media authority to give attention to this matter. As well as denouncing and slamming the gross content. In regards, the fingers are also being pointed to Mehwish Hayat who is being featured in the Gala biscuit Ad.

After taking notice of this matter, PEMRA issued the official declaration to all the TV channels for conducting the visuals the Ads authorized by the supervising and examining chamber prior to the broadcasting. In the following statement given by the media authority, they clearly highlighted that in the past time it has been witnessed that the idea and trope of ads of local products like detergents, dairy products, biscuit, etc being streaming on National television doesn’t likely to be related to the marketing point of the product itself. And this trend giving the wrong impact and becoming a source of disruption and moral interference among the audience. It is not only violating moral values but also demolishing the cultural and religious norms of Pakistani society.

Relatively, the audience is exclaiming the themes of advertisement are wacky and unconventional that the visuals do not match with the advertising and use of the products. Additionally, complainants are on the perspective that the appearance of the local products on National television is being viewed in such a way either humorous or not is directing to encourage consumerism.

According to the statement, all the TV channels are notified refine and review their team and members to give importance in consideration to the viewer’s concerns on the subject matter of the ad and especially take notice of the Gala Biscuit Ad. Furthermore, the viewers are throwing rotten tomatoes by spilling off their anger and sentiments tweeting against PEMRA. Here are some of the tweets we have gathered for you here below.