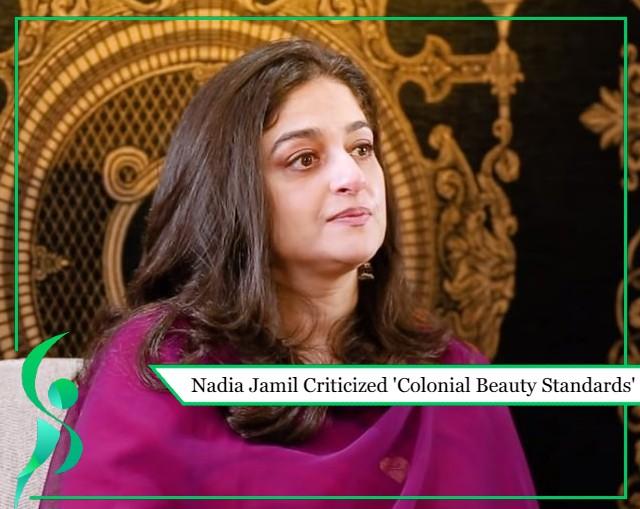 Nadia Jamil is one of the most popular and iconic actresses of the Pakistan showbiz industry. She has done some of the epic projects such as Behud, Balu Mahi, and Meri Jaan. She has also worked as a host in the showbiz. he has been an activist and spoke about multiple happenings and issues that have brought up lately. She has also discussed and have shared her views and perspectives about women’s affairs. She has enlightened the fluctuating stereotypes of our country over the subject of women which truly shows that Nadia Jamil is not only an actor in the showbiz industry but also speaks up over women issues as a citizen of our country.

Recently, Nadia Jamil shared her views on the Twitter thread. She spoke about the groundless and unreasonable identity and image standards based on beauty, and this wanton idea and culture have injected in our society for like a years ago and because of these arbitrary standards placed by our society is the main cause and reason behind harmful and destructive result for the women of our country. She shared tweets threads concluding her perspective about Colonial Beauty Standards.

She wraps up about the consequences in her tweets that being a woman in a society where the female gender is adored and admired by a beautiful face rather than a beautiful personality it’s not only being hyped up in the society now but it is also being subjective and most important agenda in all the marketing platforms of our country. These beauty standards idolized by society has made women face consequences not only in their lifestyle but also outside the door of their homes. And this doesn’t look alike easy but it is necessary to question people provoke these clichés.

Simultaneously, Nadia Jamil also concluded her fans and followers to not get scared and horrified by the reality. She further narrated her words that things take time and change can be brought up slowly. And things will work out progressively bit by bit. So we all should not lose hope and be optimistic because we all have seen and spot the differences and anticipated a big break away from these stereotypes. Sooner or later but things are processing in their way and it is occurring now.

Following the last order of her tweet thread, the Balu Mahi actor Nadia Jamil also gave a conclusion by narrating an example of a fairness trademark that recently changed their brand name after being a controversial subject for encouraging and developing wrong marks and it witnessed to be problematic.

Well, the forces have although not restricted Nadia Jamil to spill over the issues and injustices happening in our society. Especially after the motorway incident happened a few days ago many people talked about public implementation and strict action against the incident not concluding the real problem of our society. Nadia on the other hand spilled about social rebuilding is necessary along with education and awareness.