Home Drama Here’s the Responses of Public on Chupke Chupke and anxiously waiting for... 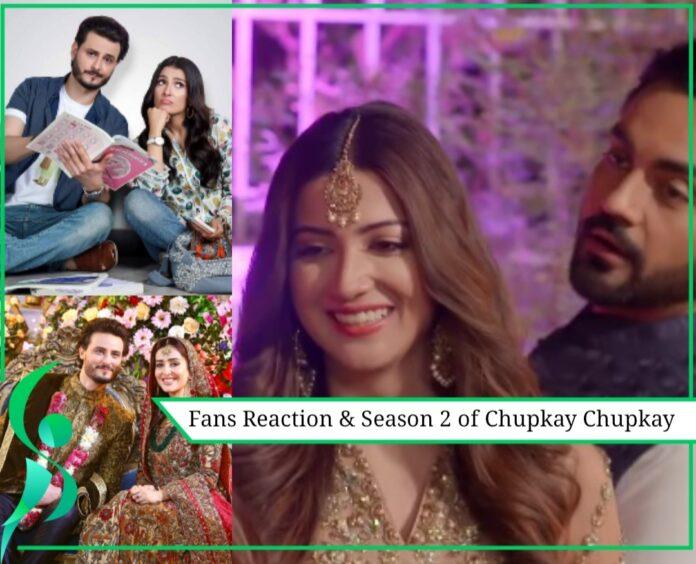 As we know that the Pakistani’s yearn for beautiful serial dramas. And this is a fact that we always being tired of seeing women being slapped after all the incidents or get out of the house. It bothers me these days, no matter how much you love the play. There will always be one or two things that are most disturbing about it. But one drama serial names “Chupke Chupke” shocked me and we are all too much glad to see that drama. And it has become our favourite Ramazan treat this year. This serial has emerged as a worldwide hit, with many of YouTube’s top episodes and top hashtags not only in Pakistan but also in India and Bangladesh. According to director Danish Nawaz’s this drama is a combined total of 100 million views.

Most probably public loved the dressing and dialogues of this serial. Ayeza Khan’s dressing was wonderful and her fans are copying her dialogues as well as dressing. Her kurtas and khussas are just loveable.

It is a recent production of “HUM TV”. The main part of the Ramazaan series by actors is usually very large and beautiful when you see different artists. The drama cast includes the most talented stars of our showbiz Aiza Khan (as Meenu), then comes Osman Khalid Butt(as Fazi). The debut faces Arsalan Naseer(as Hadi), Ali Safina(as Miskeen). Mirha Seeethi(as Gul apa), Aymen Saleem(as Mishi) in leading roles and many more skill full actors. This pretty story is written by dramatist and novelist Saima Akram Chaudhary. And with great beauty it is directed by Danish Nawaz.

Chain of events of Chupke Chupke:

The full story from very 1st episode to the last one was fantastic. Every episode ended with a new type of interest that we all didn’t wait for the whole day. The whole storyline revolves around Dada jaan who has two wives names Naik Parwar(as Asma Abbas) and Bakhto(as Uzma Baig) living in a separate home Nawab Villa and Nawab House. Both Dadi’s have a strong contention and keep their grandchildren apart. Although they hate each other and have strained relationships. The cousins (including Faazi, Meenu, Mishi, Waleed, Mirchi, and Hadi), both dadi’s grandchildren are different and happier and they always end up sharing secrets with each other.

The drama works with the proper purpose of giving a quick laugh, even if the story touches on the same graph ‘old same’ is still fun and interesting. One-liners are usually laughable and applauded. Ayeza Khan (as Meenu) is playing her role as a beautiful and stunning university girl, very well. In this serial she is a lucky girl, she detest her studies and is insulted by her family for her childhood habits. He has always failed in her BS mathematics. She didn’t have any interest in studies and she married to save her life from studies. She is taught by Faaz. And later became wife of Faazi. Osman Khalid Butt( as Faazi) also shows off his curve as Faazi is admirable. The chemistry of this couple is just loveable. It is limited on the screen and comedy times fail to leave a quick giggle. Seemingly, Faazi is Meenu’s teacher too, and they share a loving hate relationship with each other. Cousins like these are the ones we love the most. After a set of impossible but humorous events, Faaz and Meenu finally got married, both families regretting the wedding after five minutes full of compulsion. The after wedding a lot of twists were there in drama. 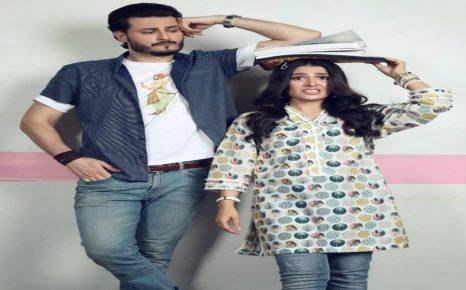 During the pandemic, content creators present us with their alluring content. And in this drama serial we saw a lot of entrance of new faces in showbiz industry. Like Aymen Saleem(as Mishi) who is not just an actress and a model but youth ambassador of Pakistan who won the World Record in 2010. Before this drama serial we didn’t know about that she is the niece of Nazia Hassan. Mishi in this drama is the youger sister of Faaz. Her character shows simplicity. She is the most generous and open-minded person in her family, but she is also neglected by everyone. She has a crush on Hadi. Arsalan Naseer(as Hadi) who is a YouTuber, mad his first acting in this drama serial and his fans remain shocked to see him as a best actor. Arsalan Naseer was already famous from his youtube channel CBA( Comics By Arsalan) in which he talks about the latest happenings in hysterical way. His dramatics and bonding with Mishi (Aymen Saleem) is the new conversation everywhere. In this serial he plays a very remarkable role as the eldest son of Kishwar and love interest of Mishi. His qualification is MBA, and he is unemployed and not accepted by many companies for job. His mother wants him to work at his uncle’s poultry business against his will. There were many ups and downs in the life of Hadi and Mishi but at last both of them get married. 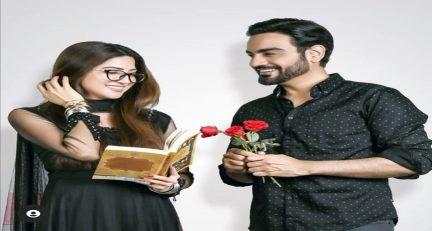 Asma Abbas(as Naik Parwar), Nawab Sahab’s first wife and the ruler of Nawab Villa. Her background is from Okara. Naik parwar is in the never-ending clash with Bakhto. And her grandchildren called her aslo “Bebe”.

Uzma Baig(as Bakhto) Nawab Sahab’s second wife and the owner of Nawab House. She is a native of Sadiqabaad. Nawab Shab married him right after two months of his first marriage. And battle was started between both of them. She is .also called “Amma”

They are just as clever as a quarrelsome grandmother. Considered by social media, they both send wrong messages, one after another, like teenagers.

Villain of the serial:

The most cleverer personality in whole drama serial is Gul Appa(role played my Mirha Sethi). She is Faazi’s heart-hearted twin but only a minute older which she is taking unfair advantage. Their parents died at very early age and she took duty for care her sisters and brother. That’s why she stayed at her home after marriage with her husband. Her husband Miskeen Ali(role played by Ali Safina) always called his wife “Mery Sarkar” and always remain scared from his wife. He is Bakhto’s nephew who lives with them. He is always offended by the family for his laziness and at snoopy attitude. 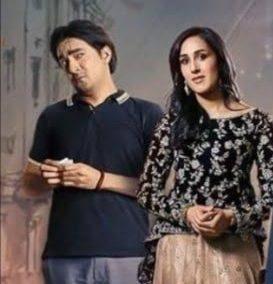 The most trending dialogue of the serial is of the brilliant actor Ayeza Khan. That dialogue is copied by a lot of Pakistanis mostly children inspire from her. And the dialogue is: 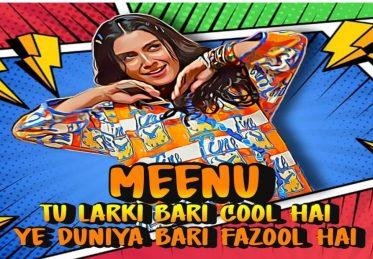 The other notable dialogue is of Miskeen Ali, which he used to say himself at the end of every conversation. And that phrase went down into people’s hearts. 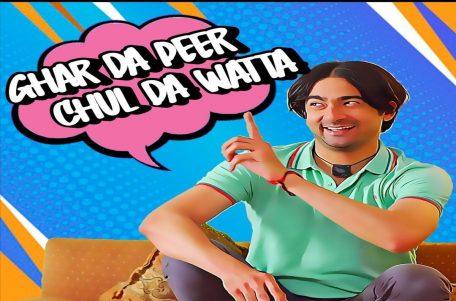 And the accent of Bakhto was also prominent and copied by many of us. Her dialogues are incredible and amazing. 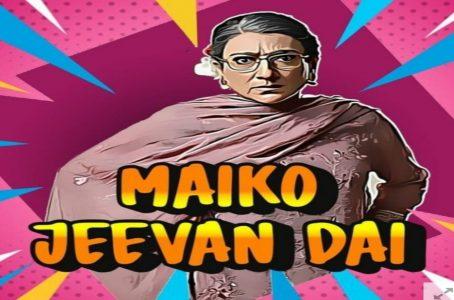 So these all are the memes that are made by fans of Chupke Chupke to show their love for this drama serial.

Grumbling personality of the serial:

In every family there’s a grumbling personality present who used to talk here and there. Same kind of personality is present in this drama serial name Mirchi(role played by Areesha Sultan). She is Meeno youngest sister. She leads the social media accounts of her Bebe(Naik Parwar) but she use them to spread all the private news of her family. She never hides anything and always spread faulty news. This drama serial is the start of her showbiz industry. In this her performance is extraordinary and her cuteness is all over the internet. 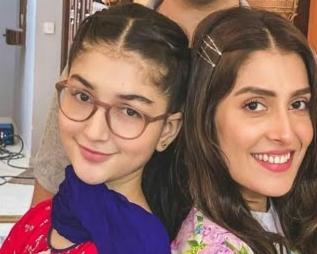 Farhan Ali Agha (as Kifayat Ali) he is Naik Parwar’s younger son. He is money-maker and only cares about house expenses and tries his best to save money. He owns his father’s chicken business. And Tara Mahmood(as Kaneez) is Khifayat’s wife and mother of Mirchi and Meeno. She is determined to clean the house and is known for her friendship with her sister-in-law, Kishwar(Hadi’s mother). 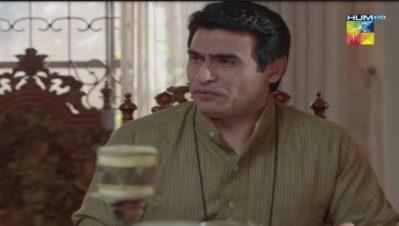 As there are many fans of Chupke Chupke and public love this drama serial most. But as per head some of people starts criticism towards Ayeza Khan. Public said that she is mother of two children so she was not perfect for this acting of university girl. But mostly we love Ayeza for this role. Public start talking to the writer that she is not perfect but in return Saima Akram (writer) spoke that this is not her duty to hire any actor from drama. As per director (Danish Nawaz) Sohai Ali Abro, was the firdt choice for this role and she had even shot few scenes for the drama but due to covid-19 and lockdowns they stopped shooting. Then due to some personal reasons Sohai Ali Abro exit the show.

From the point of view of acting and comedy moments, we loved seeing the characters roaming our television. While the show was loved and praised by viewers, there were also interviews for the second season. Public enjoyed a lot the drama serial Chupke Chupke and they are asking for season 2. But still now there are a lot of false gossips about season 2.

But is there any season 2 coming next Rmazaan or not?

This question is on everyone’s mind. And all of us are double minded. But still now all are the rumors and in recent interview Danish Nawaz said that nothing has been confirmed yet. But if another good script will present we will do work for season 2. Then public demands from the writer (Saima Akram Chaudhary) for another season of this serial. But in return she said I am not doing work on season 2 yet.

Some days ago Ayeza Khan comes live on her social media plat form and public was also asking from her about season 2 and in reply she said “Who knows, May be you get any surprise next Ramazaan.”

Now still public is confused and look what happens next.

Overall the drama is good and the story is funny and confusing. If you haven’t seen it then give it a watch and get more twists and turns in the story. This drama serial has given to those who watched a welcome break from last year’s of pandemic stress and anxiety. And made us cheerful and delightful in whole lockdown. The elders, teenagers but mostly children loved to watch this drama serial. This drama serial proved that cousins are the best and only they are present in your difficult time.