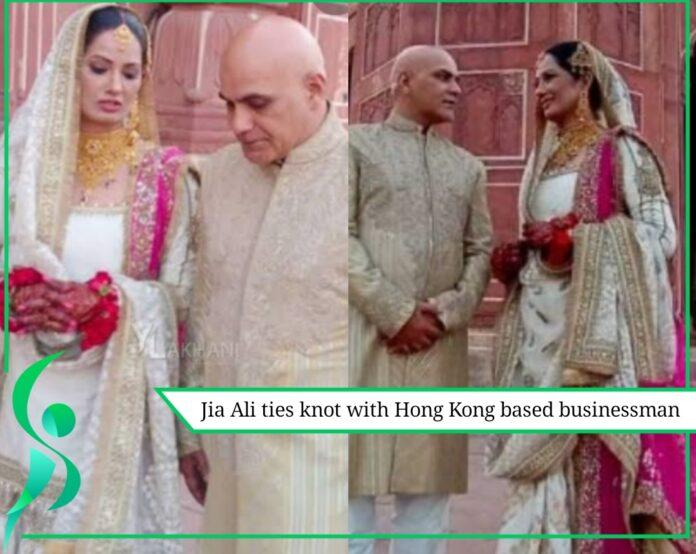 Jia Ali, Pakistan’s most charming actress and model, is now married to her husband, “Imran Idrees.” Jia Ali is from Lahore. She came to this world on 8th Sep 1972, in Punjab, and is from Christian Family but many people mistaken and thought that she is from a Muslim family. She has four siblings. One of her brothers is Munna Mushtaq, Who is a very excellent and outstanding photographer. Her father’s name is Saleem Abbas who lives in London (UK). Her mother is no more in this world. She is the last child of her parents. Her four brothers are elder, Jia loves them the most after the death of her mother. She completed her education at St. Mary High School, Lahore. Jia Ali is a famous model and popular Pakistani actress with the best acting in her dramas and movies. Jia Ali has a very inspiring and pure nature, many of her fans, inspired by her acting in films and dramas. Jia Ali always wants to have fun and enjoy her life to the fullest. She doesn’t like when someone stops her from enjoying her life. She stole the hearts of many people.

She started her fashion modeling at the age of 19, in the year 1991. Firstly, she started working in a beauty Salon was known as “Deplex.” Then, she entered Showbiz. In one of her interview, she said that fashion brings spark inside her and always feels that’s its the first time she is walking on a ramp. She worked with many designers and did modeling for them. She had many and beautiful fashion shoots for Wrangler. She gave the best in her modeling, so many directors offer her to work with them in movies and dramas. Jia Ali is also known as “Style Of Diva” Because of her glam in modeling. She started her career years ago but still, she is everyone’s favorite in Pakistan. May her glam never fades away and her place in the hearts of people remains the same. She also gave the opinion of her point of you to the filmmakers of Pakistani Industry that they should change their way of thinking on creating inspiring and popular movies because, According to her, they were not letting the talent rule.

Dramas in which Jia Ali played her roles were:

Jia Ali has worked for approximately 21 Serials and seven movies of Pakistan until now.

Films in which Jia Ali worked and played her incredible role was:

All her Dramas and Films were from Lollywood as she is a well-known actress in Pakistan. She had awarded in 2017 for her best performance in Saya-e-Khuda-e-Zuljalal. Jia Ali became the inspiration of many young Pakistani girls after doing her hit and blockbuster movies. Jia Ali was also looking forward to work in Tollywood, Chennai film Industry, and also Hyderabad.

Jia Ali has an everlasting love for television and cinema. She also has little interest in dancing and singing but not much!

Jia Ali rejected many offers because she didn’t want to expose herself. She loves to work as an example of real-life. Although, Jia Ali comes as a guest in many Pakistani Talk Shows, not appear much on the cinema’s screen. But she is a role model to everyone. At the age of 48, she still looks young and shows her charm and glam to the audience. Hopefully, we will see her again at the screen Cinema.

Imran Idrees came to this world on 4th March 1965, in Punjab. He is a very trusted person and has a soft nature, also has a true Nature of never giving up! He is a very successful businessman from Hong-kong. Also worked in the sports of cricket as a coach. He was also certified for his performance in sports and now is also a part of Pakistan Tareek-e-Insaaf (PTI).

Jia Ali got married to Imran Idrees. He is a rich man and a millionaire, Living in Honk-kong. Jia Ali is now 48 years old, Imran Idrees is 55 years old. Jia Ali was engaged to somebody else from Turkey, before the year 2000, when her mother was not well, she didn’t continue her engagement further after her mother died. In one of the interviews, Jia Ali expressed her love to her brothers and said maybe marriage is not her thing. But, as she had decided to marry Imran Idrees was very surprising to her fans in Pakistan. Firstly, they were both in a long-term friendship, and then they turned their friendship into a relationship, and now they are married. Their Wedding ceremony took place in Badshahi Mosque, Lahore. All her family and friends gathered to celebrate her happiness!. Their pictures of the wedding are getting viral. We all should congratulate this beautiful couple of Pakistan. May both have a blessed and happy life ahead.

Jia Ali’s wedding news is out everywhere on social media platforms such as Facebook, Instagram, and Youtube.No one ever wondered that Jia Ali would marry Imran Idrees. People are happy and surprised by her decision. May the charm of our beautiful actress remains the same even after marriage, and May she lives a happy and fulfilled life with her Husband “Imran Idrees.”Everyone in Pakistan is congratulating her for her marriage life and wishing her happiness in the future.