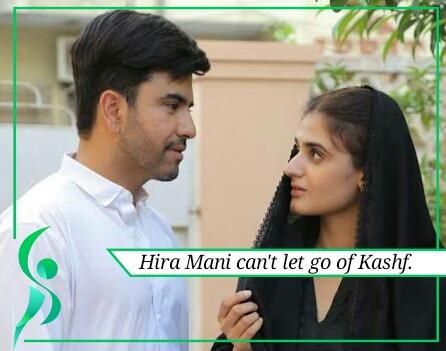 An artist is a human being that is exposed to multiple characters and sometimes gets emotionally attached to the characters he or she is portraying. There are many examples of this effect be that Dilip Kumar in Devdas or more recently Hira Mani in Kashf.

Hira Mani is one of the most revered icons of the industry and has established herself as a dominant figure in many dramas through her mesmerizing portrayals.

Hira was last seen playing Kashf in the superhit drama of the same name.
The drama explored the intricacies in the life of a special young woman who has a gift to see the future in her dreams. Facing multiple problems ranging from personal life to social life. A woman who is the sole earner of her house and has to sacrifice her wishes for her family’s benefits is truly a difficult role to play.

Hira Mani subdued the role and awed the audience with her passionate portrayal of Kashf.
The role of Kashf as portrayed by Hira is one of the best that the Pakistani industry has to offer.
However, the projection has shaped Hira Mani personally as she stated, “I catch myself when I am about to gossip about someone or when I am about to say something I shouldn’t. I immediately reprimand myself by thinking that Kashf Bibi wouldn’t ever do such things. This is how I have been living with, this is how Kashf has stayed within me.”

All I know is that Kashf has me completely within her grasp. This character has brought me peace and stability. It has made me aware of the knowledge that everything that happens, happens per Allah’s will. Without His will, nothing we ever want can happen.”

Hira Mani is aiming for a new project and is confident about it but states that Kashf would forever hold a special place in her heart.